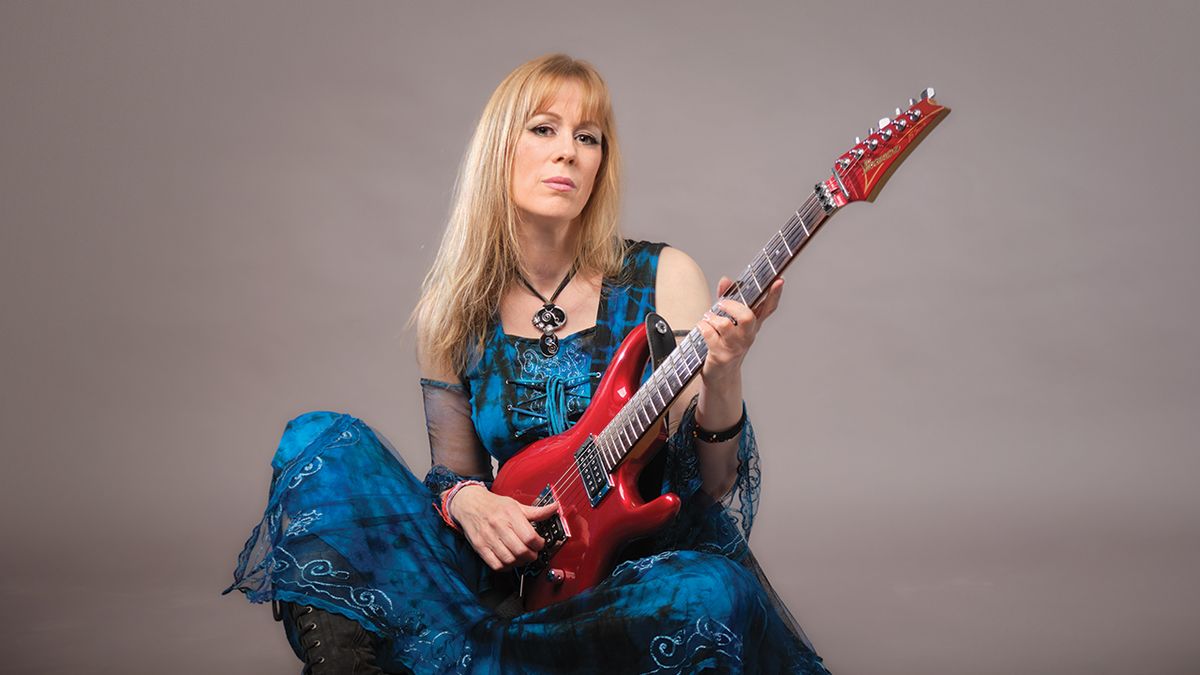 When Amanda Lehmann was a little girl, she’d hear her father playing violin, just for fun. Living in the seaside resort of Seaford in Sussex, classical music was the soundtrack in the family house and she, her older sister Jo and their mother were all appreciators. Although Victor Lehmann would perform small shows, he’d not pursued music vocationally; he was a teacher, of maths, English and, later, liberal studies.

“He wanted to go to music college,” Lehmann explains, one overcast August morning over Zoom, “but he didn’t in the end. For him, there was always a regret that he didn’t take it to a professional level, because his heart was in it.”

Victor is mentioned as a musical influence in the sleeve notes for Lehmann’s debut solo record, Innocence And Illusion, an independently released 10-tracker that takes in prog, jazz, folk, blues and AOR. It’s been over a decade in the making, but finally realised and completed in the last two years – why on earth did it take so long?

“Life got in the way,” the now Norwich-based artist laughs. And as many readers will know, some of that “life” has been as a jobbing musician and part of Steve Hackett’s band. But before that… well, let’s start with a childhood memory: when the Lehmann family acquired a piano. “I was eight years old,” Lehmann recalls. “I’d been playing recorder, and messed around with an acoustic guitar. I remember the day [the piano] arrived, and I was like, ‘Oh God, it’s here. I can actually play it.’”

Lehmann’s parents were supportive of her passion. She received lessons and became classically accomplished. But she was also tuning into the radio and spellbound by the sounds of the 60s and 70s. And one day, she heard something else playing in the house, thanks to elder sister Jo’s boyfriend: prog rock.

“When I was 10, I heard Genesis’ Wind And Wuthering and I thought it was fantastic,” Lehmann beams. “It was music that I loved and I could just see all these wonderful images that the music was evoking. It also got me on an emotional level, so that was the first progressive rock music I’d heard and it went on from there. I kept asking him for more things and I managed to get hold of The Alan Parsons Project’s Tales Of Mystery And Imagination.”

Piano practice continued and Lehmann sang a lot, attempting “all styles of music”. Her favourite composer was Rachmaninov, and she reached for complex pieces but “wasn’t achieving them”. Meanwhile, there was anguish at home as Lehmann’s father became ill with cancer. He died when she was 14.

“That shattered my childhood,” she says. “He’d been ill in hospital for a while and I became withdrawn. I was quiet to the point where I said nothing. I was there and my eyes were contacting people, but I just couldn’t speak.”

Lehmann found herself desperate to make the leap from child to adult, and started to hang out with an older crowd. “I kept putting myself in really difficult situations with people who were a lot older than myself.” She was “a zany-looking kid, always wearing denims, leathers, patches and studs”, and her musical heroes were now Stevie Nicks, Kate Bush and Pat Benatar. Being a teenager in the 80s meant rock, blues and metal influences sidled up to the existing pop and classical ones. Having a guitar-playing boyfriend, she felt the desire to learn the instrument herself.

“I was still playing piano, but I felt constrained and unable to branch out and do my own thing,” Lehmann says. “That’s when I got my first electric guitar.”

Starting with a red Washburn and influenced by Ritchie Blackmore, Mark Knopfler, David Gilmour, Nancy Wilson (Lehmann would later play her in a Heart tribute band) and, of course, harking back to Wind And Wuthering, Steve Hackett, Lehmann found her voice and moved into the next phase of her life. She located to Brighton aged 17, joined many bands and played gigs, gigs and more gigs – always with a red guitar.

“You can play emotional music with a piano, but a guitar is more like singing. Once I tamed the sound,” she says with a laugh, “a guitar is like an extension of yourself and you can like move with it, let it fly. Onstage with a guitar and a microphone, I could communicate, I was confident.”

By the 2000s, Lehmann’s mother had relocated to Norfolk and Lehmann followed. She’d been in an eclectic duo called Wazzoon with keyboard player Eddy Deegan, and released one album, Through The Haze, in 1994. But Lehmann was a now a single parent – her son is named Victor after his granddad – and she was keeping her hand in with solo shows in local venues. In 2009 her elder sister Jo and partner Steve Hackett came to see her play in a tiny pub venue, The Spread Eagle in Erpingham. “It was a tough audience that night,” she remembers. Her set was cover versions, with a few originals included. By the end she had the place “rocking”. Afterwards Steve said to her, “I couldn’t do what you just did.” Lehmann smiles when she remembers, “And then he asked if I’d like to add backing vocals to his next album, Out Of The Tunnel’s Mouth.”

Lehmann then joined Hackett’s band, spending the next decade touring and recording with them as vocalist and guitarist, and contributing to myriad other projects as work kept rolling in.

It’s understandable how Innocence And Illusion could go on a back-burner. But in the last two years the record has come together, via the remote swapping of digital recorded files. Featured on the album are Hackett bandmembers Roger King on keyboards and Rob Townsend on alto sax, and Mr Hackett lends harmonica to bluesy number Only Happy When It Rains, and ripping guitar to an AOR-ish rocker about Lehmann’s teenage years Forever Days (“I had to give that to Steve – it’s got the shredding, tapping, fast whammy bar and all the melodic stuff later on as well”). Lehmann plays guitar, keys and programmed drums, but the person who brings it together is keyboard player, composer and arranger Nick Magnus. A Hackett band alumnus, he and Lehmann had connected at gigs, through the 2016 charity compilation Harmony For Elephants, and Lehmann also contributed vocals to his 2019 solo album Catharsis. “Nick is so talented,” she says. “He just brings things to life.”

One spin of Innocence And Illusion shows this. The production value is vast, from grandiose opener Who Are The Heroes? to the folky outro of Where The Small Things Go, originally a 2020 lockdown ditty created by Lehmann and Hackett to put a little joy out into the world. Second track Tinkerbell is what hooked this listener in, though. Inspired by the fiery fairy character from Peter Pan, Lehmann wanted a panoramic, Tim Burton-meets-Harry Potter feel, and that’s what Magnus created. “I was thrilled,” she says. “He added this instrumental part and Mellotron washes, and it was totally mind-blowing. He knows exactly what I want without asking. It’s like a Vulcan mind-meld or something!” For guitar, Lehmann took care of the part with zeal as Tinkerbell gets agitated and a little madness swoops in. “I was feeling angry about something that day, so you can definitely hear that,” she laughs.

She says that her lyrics take a metaphorical approach, “making a story out of human experience and speaking to people on a wide level”. However, the record is personal. The oldest track is Memory Lane, a gorgeous folk-tinged ballad which touches on Lehmann’s late mother’s struggle with vascular dementia. “She was ill from 2010 to 2016,” she says. “After I’d seen her, I’d come home and write a few words. Eventually I had pages and pages. We were close and it helped me deal with it. I hoped people might relate to it.”

Tales of mystery and imagination? Oh yes, and so much more.

This article originally appeared in issue 123 of Prog Magazine.

In this article:Amanda, Lehmann, Life, Music