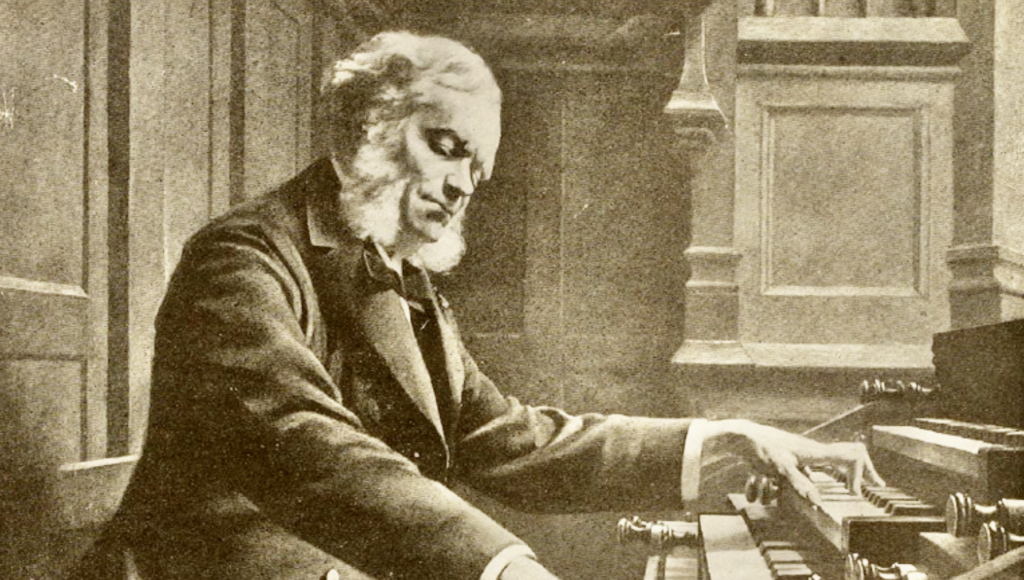 César Franck is one of those 19th-century composers who deserves to be much better known. I’ve been listening to his extraordinary Symphony in D minor for more than 20 years and knew I loved it, but I couldn’t tell you why until my recent research on him and his music.

Many of us have been in a church or concert hall where an organ is being played, all those chords and majestic sonorities cleverly manipulated to create a sublime listening experience. Sometimes, if you’re lucky, while you’re visiting a grand cathedral, the organist might be practicing for a concert and you’re treated to a performance that stirs both the soul and the bones. You stumble out of there afterward, thinking, “Now that was music.”

No, this isn’t an essay about a piece of organ music. Call it a hint as to what makes César Franck’s Symphony in D minor so extraordinary. I’ve been listening to this composition for more than 20 years and knew I loved it, but I couldn’t tell you why until my recent research on him and his music. So we’ll come back to the organist reference later, I promise.

I first discovered César Franck and his music back in December 1994. My husband and I were expats living in London, and I’d bought a CD entitled Sacred Songs for Christmas, which included Franck’s transcendent “Panis Angelicus.” (I wrote about this stunning piece of music HERE). But it would be several more years before I sought out more of Franck’s music. He wasn’t a composer whose orchestral work was featured at the symphony, back home in California, certainly not his Symphony in D minor. By chance, I picked up a CD at the library, recognized the composer of my “Panis Angelicus” fascination, and checked it out.

César Franck is one of those 19th-century composers who deserves to be much better known. Christened César-Auguste-Jean-Guillaume-Hubert Franck (I know, right? Try and say that fast), he was born on December 10, 1822, in Liège, in Belgium’s French-speaking Wallonia region. As a boy, César showed musical talent early. His canny, ambitious father, Nicolas-Joseph, a bank clerk, visualized a profit-yielding piano virtuoso in the making, and advanced his young son, procuring him a place at the Royal Conservatory of Liège, and later at the Conservatoire de Paris (where he was required to take French citizenship before being accepted), all the while peddling him as a virtuoso performer on the piano. His father was moderately successful—César once performed for no less than Leopold I, King of Belgium. In his son, Nicolas-Joseph continued to foresee a lucrative future for the Franck family. But problems arose in Paris during the Conservatoire years, where Nicolas-Joseph’s commercial promotion of his son was having an antagonizing effect on Parisian musical journalists and critics. After one particularly fierce argument with an influential critic where personal insults were flung, Nicolas-Joseph departed Paris in a huff and returned to Belgium. César voluntarily left his training at the Conservatoire around this time (commanded by his father to do so?) and returned to Belgium as well. The setup—again the concertizing aggressively touted by his father—lasted less than two years. Finally César made the decision to return to Paris, alone, against his father’s wishes. He’d had enough of the highly competitive piano-virtuoso rat race, he decided. It was not his calling, in the end. And his future was not his father’s call, either.

And this is where the organist reference fits in.

You see, César was really, really good on the organ. A master and a skilled improvisor, his love and reverence for the instrument and its sounds was lifelong. Even composing came a distant second to his pursuits on the organ. From 1847 to 1858, he was employed as the organist at Notre Dame de Lorette and then at St. Jean – St. Francois. In 1858, he became the organist at the Basilica of Sainte-Clotilde, where he remained until his death, over three decades later. Alongside his work as a master organist, he taught organ and composition, joining the Conservatoire de Paris faculty in 1872. He was a devoted teacher, beloved and revered by his students (among whom included Vincent d’Indy and Ernest Chausson), whose loyalty to him was fierce. By his fellow teachers, alas, he was merely tolerated, possibly given his Belgian heritage and Germanic leanings musically (Wagner was an influence on his work). He remained much the same through the years, a humble, devout man, deeply committed to his religion, his art, sometimes to the exclusion of the people and sights around him. His own death in 1890, in fact, was likely hastened when he stepped out absentmindedly in front of an oncoming bus on a city street and was hit. (Other accounts argue he was riding a cab that was struck by a horse-drawn trolley.) While he survived — story has it, he rose, dusted himself off, and continued right on to the lesson he’d been on his way to teach, his health soon deteriorated and he died within the year.

I love this image of him that Bill Parker, in Building a Classical Music Library, creates:

[…] his clothes were ill-fitting, he grimaced to himself as he hurried nervously down the street, he was absent-minded and sometimes embarrassingly childlike. If no one showed up for his classes at the Conservatory, he might stop by Massenet’s classroom, pop his head in the door and plaintively ask, “Isn’t there anyone for me?” All of this only made him more lovable to his clique of followers. Known as la bande à Franck, they believed in him as a musical prophet, based primarily on his development of “cyclic form,” and thought of him as a saintly father.

In the last decade of Franck’s life, composition finally burst through him in great profusion—he’d composed only a handful works up to this time, notably for the organ. Unsurprisingly, the new compositions, particularly the Symphony in D minor, seemed created through the lens of his experience as an organist. Timothy Judd, at The Listeners’ Club, elaborates on this theory:

The first movement unfolds through a series of sweeping modulations reminiscent of a masterful organ improvisation. In fact, in Franck’s hands the orchestra becomes a living, breathing pipe organ. Instruments are mixed and doubled as if a rich array of stops are being negotiated.

You know that term, “pulling out all the stops”? As in, Whoa, Bob really pulled out all the stops for this party, didn’t he? Wheee! Its original usage derives from organ-playing. That was what Franck knew how to do, for maximum effect, even without an organ. It explains the astonishing power of the end of Symphony in D minor’s already impressive first movement, and much of the final movement. Finally, I get it, after 20 years of listening and wondering!

It should be noted that, while most symphonies are four movements, Franck combined the second and third into one, an “allegretto” that has a piercing sweetness informed by notes of bittersweet and savory. The melody is dreamy and haunting, commencing with harp and pizzicati (plucked strings) on the violins, followed by a new melody line by a lone English horn (which, ironically, is neither English nor a horn, but a member of the woodwind family, like a low-voiced oboe). There is a sense of spaciousness to the music in this movement. It’s not a busy composition here, and as such, casts a spell on the listener. It’s gorgeous.

The haunting melody line returns in the rousing, giddy final movement, in a cyclical-structure form, a style pioneered by Franz Liszt and developed further by Franck, whereby principal themes generated in earlier movements come together in the final movement, interweaving and melding beautifully.

Then there is the contrapuntal nature of the Symphony, particularly in the third and final movement. I can see some of you scrunching up your face in confusion at the term. Basically, it’s when you have multiple passages or melody lines going on concurrently, led by different instruments (or not), and they fit together perfectly. Think about a merry-go-round. You have two horses side by side (or not), going up and down at different times. You’ve got the whole platform of moving horses and/or other fiberglass animals, chugging up and down amid a smooth loop around and around, and it all flows together artfully as one.

Franck employed this to great effect, particularly in the third movement. The independent melodies are so vivid and triumphant, and as the symphony builds to an “all stops pulled out” crescendo, I always need to pause and allow its majesty to sweep me away. (Bad time to be driving, I’ve learned.) It moves me to tears every single time. Year after year it’s the same. If anything, with each passing year, I discover something new to appreciate in the Symphony in D minor.

Good time to give it a listen.

Ironically, the Symphony in D minor was poorly received, upon its completion in 1888. Politics were partly to blame. In the wake of the Franco-Prussian War, Franck’s mix of French style with the influence of Wagner and Liszt was seen as a nationalistic betrayal. Beyond that, there were complaints that the opening theme stole from Beethoven’s String Quartet No. 16 (ultimately a lone musical idea of less than a bar), that the themes were too similar to each other, that the orchestration was “too thick and unimaginative.” The English horn was deemed an unappealing, unorthodox choice over the more frequently used oboe.  Charles Gounod claimed the symphony was “incompetence pushed to dogmatic lengths.” Charles Lamoureux, a leading Parisian conductor, declined to premiere the symphony in his highly important concert series, and so the premiere was given by students of the Paris Conservatoire.

But through all the vitriol and criticism, the unflappable Franck remained calm. “It sounded just as I thought it would,” was his serene reply.

And as we know, the words of the critics, about the mechanics of the piece, the composer’s choices, whether it obeys the current dogma, the politics, et cetera, don’t mean all that much, in the end. It’s the music, the art, the touching of the listener’s soul that matters, for so many of us.

Well done, César Franck. Your music has touched my soul.

Republished with gracious permission from The Classical Girl (December 2022).

The Imaginative Conservative applies the principle of appreciation to the discussion of culture and politics—we approach dialogue with magnanimity rather than with mere civility. Will you help us remain a refreshing oasis in the increasingly contentious arena of modern discourse? Please consider donating now.

The featured image is a photo of Jeanne Rongier’s 1888 painting César Franck at the console of the organ at St. Clotilde Basilica, Paris, and is in the public domain, courtesy of Wikimedia Commons.