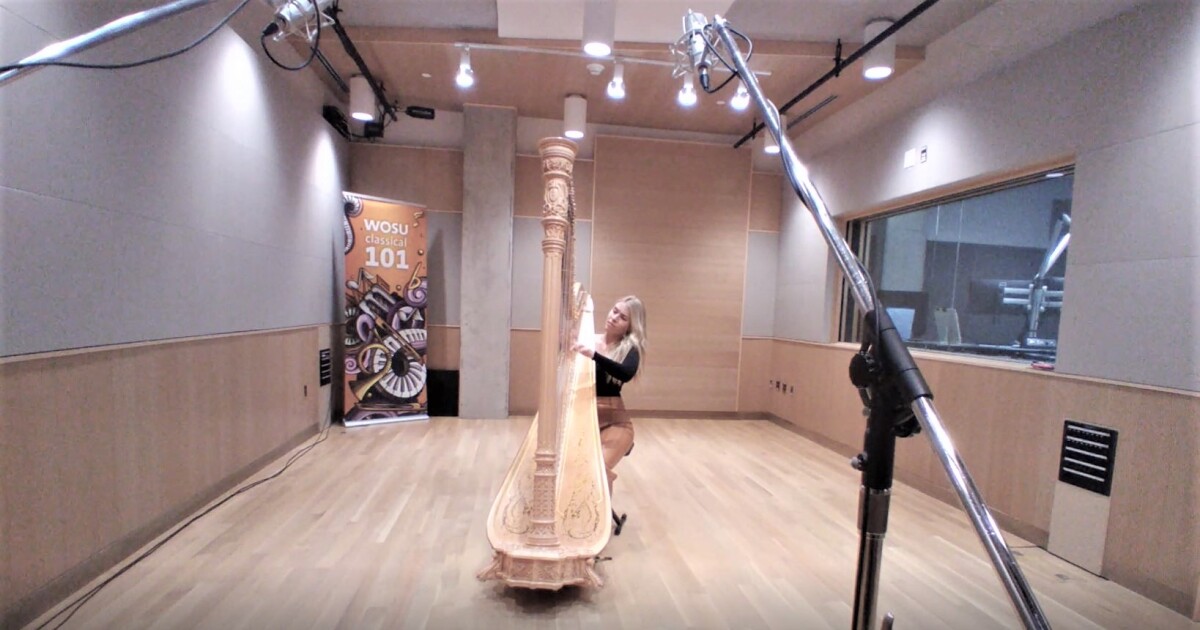 It sounds like heaven itself—the crystalline twinkling of a harp conjures images of angelic hosts flitting among the stars sparkling in the Milky Way.

But behind the harp’s shimmering sound and striking shape is an instrument that is as tricky and finicky to play as it is cumbersome and expensive to cart around.

It’s all in a day’s work for Raspé, who performed Mikhail Glinka’s beautiful Nocturne for Harp recently in WOSU Public Media’s Performance Studio.

Raspé’s journey with the harp began when she was five years old. She saw the Disney animated film The Aristocats and was taken by the scene in which Duchess, the mother cat, plays the harp.

“I told my parents, ‘I really, really want to play the harp,’” Raspé said. “And they said, ‘Okay, three more years of piano (lessons),’ thinking that I’d probably forget about it.”

She didn’t. Raspé says she was obsessed with the harp’s curvy shape and elegant sound. When she turned eight, she got a lever harp, designed for beginning harpists. The lever harp is smaller and has fewer strings than the 47 strings on a standard concert harp. It also lacks the concert harp’s seven pedals.

Raspé soon graduated to the concert harp. With the joys of playing such an ethereal-sounding instrument also came the challenges of carting it around.

“It is something you should definitely know when you start to play the harp,” Raspé said, “that there is a lot of moving involved, and it is not an easy instrument to move.”

It’s not easy to move, because it’s big – a concert harp is six feet tall – and its shape is as unusual as it is lovely. To move a harp, you need a long car with backseats that can fold down and lie flat. And just as regular folks judge cars, in part, by their road feel and legroom, harpists judge vehicles by what you might call their harpability. In The Harp Column, a trade magazine for harpists, the regular feature “Harp on Board” gives the skinny on new harp-friendly car makes and models.

Raspé follows that feature, and when she’s shopping for a car, her harp goes with her.

“Whenever I go to buy a car, I bring the harp with me. That sounds crazy, I know. But it’s a very unique shape,” Raspé said.

When a harp isn’t being chauffeured around, it needs somewhere spacious to live. Think of the harp as the Great Dane of instruments – large and gawky, but uncommonly sweet. Like an actual Great Dane, who can easily transform your entire living room sofa into a dog bed, a harp also needs its personal space. Raspé says her home has a dedicated harp room, which her two concert harps and smaller lever harp share, like siblings.

“It’s like another family member,” Raspé said. “You basically know that whatever home you have, you have to have a room for them.”

You also have to have room for their gear. With humans, it’s clothes, furniture and devices. With harps, it’s benches, dollies and custom shipping cartons. When some part of a harp’s mechanism goes awry, if a harpist can’t drive the instrument to a technician, the harp must be shipped to the technician in its own eight-foot-tall carton. Housing the carton is like housing an additional plus-sized harp.

“When you purchase a harp, you keep the carton that it comes in so if you do have to ship it, you have exactly what you need. You don’t want to break (the carton) down, because it’s all set up in case you do need to send your harp back. So where you keep that thing – it’s not easy,” Raspé said.

Despite its cumbersome size and shape, when you hear how effortlessly the sound floats out of a harp, you might think playing the instrument is easy.

Not so much. To begin with, all of its 47 strings must be perfectly in tune with each other, and tuning the instrument takes a long time. Raspé arrives at rehearsals an hour in advance just to tune in silence. But after being played for even a few minutes, the strings can go out of tune.

“A lot of times we’re checking (the tuning) a little bit even during pieces just to make sure, especially if there’s a new string that’s not exactly staying on pitch,” Raspé said.

Then there are the pedals, which raise or lower the pitch each string makes when plucked. The pedals allow harpists to play equally adeptly in every key, but they don’t guarantee perfection.

“With the harp you can have your fingers on all the correct strings, but if your feet aren’t in the right place, if your pedals aren’t right, then you’re playing the wrong notes,” Raspé said. “If you’re not connected consciously to what your feet are doing with the pedals, it can be completely disastrous.”

Despite the hassle involved in transporting the harp and the treachery involved in playing it, Raspé says there’s a certain paradoxical practicality to playing the instrument.

“The wonderful thing about the harp is you are almost always able to be gigging no matter what – as a solo artist, as a chamber musician, you can play for weddings, you can play in an orchestra. Over the pandemic I was playing the harp for yoga classes,” Raspé said. “I feel like you almost always have performance opportunities. And I feel that that’s the great thing, that there is always a place for you in the harp world.”