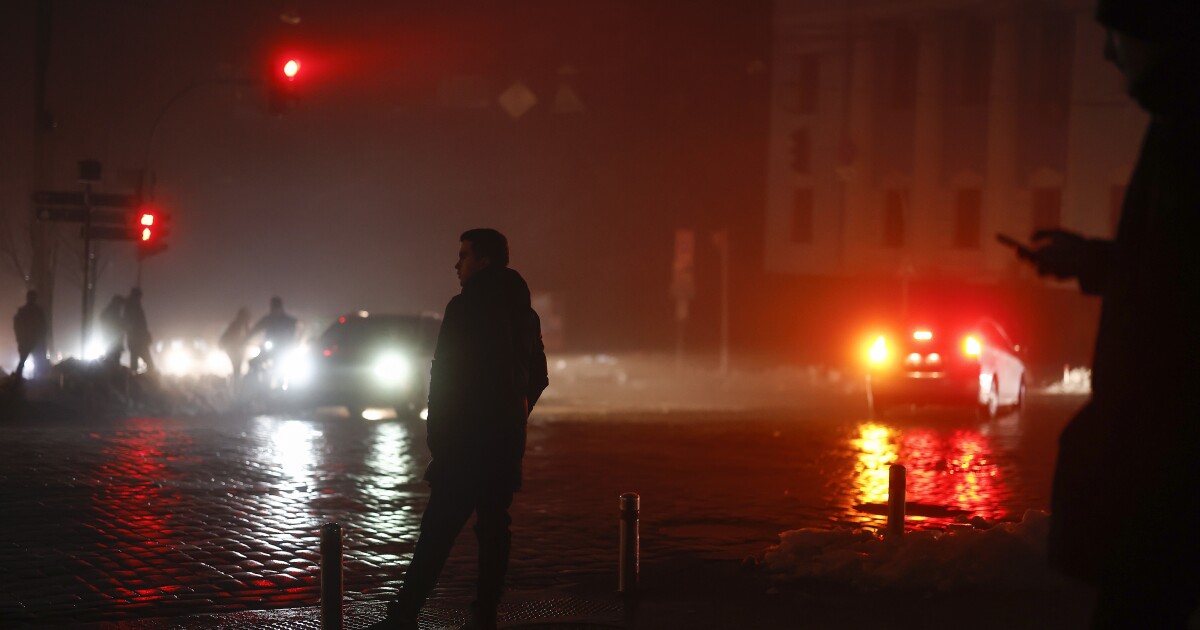 KYIV, Ukraine — When Ukrainian solider Viktor Ganich was given a brief leave from his military unit, he went to stay at the apartment of his mother and step-father in Kyiv.

Then came an early morning barrage of Russian drone attacks on the city.

One drone slammed into the apartment where Ganich was staying. He survived. His mother and step-father were killed.

“Honestly, it’s a very strange feeling,” said Ganich. “Because on the front line, I witnessed bullets above my head, tank shelling, mortar shelling, and I survived. And when I came here to Kyiv, it’s strange, because, it just feels like it’s destiny.”

Russia dramatically stepped up its air campaign last month with waves of drones and missiles.

In the latest barrage, Russia fired 70 cruise missiles on Wednesday. This knocked out electricity, heating and water in many cities and further damaged the already fragile power system. These basic services were steadily returning on Thursday and Friday.

Ukraine said it shot down 50 of the 70 missiles on Wednesday. The figure couldn’t be independently confirmed. But it’s in line with other recent claims by Ukraine, which says it usually knocks out two-thirds to three-quarters of the incoming fire.

But the Russian weapons that reach their targets are causing serious damage.

A need for more air defenses

“Ukraine does not have enough firepower to be fully protected from the sky. That is why we ask the whole world to help Ukraine by any means,” said Col. Yurii Ihnat, the spokesman for Ukraine’s Air Force.

Ukraine’s limited air defenses have been geared to protect key military and government sites. But the recent, more widespread Russian attacks have left Ukraine unable to protect all the potential targets in the energy sector.

Ukraine says most of the country’s power plants and substations have been hit and damaged since the stepped up Russian air campaign began Oct. 10.

The result is rolling power cuts for now, which usually last around four hours at a time. The more ominous prospect is of extended blackouts during the coldest days of winter.

“I think Ukraine does face a real challenge from a concerted Russian strike campaign that’s focused on the electricity grid,” said Michael Kofman, an expert on the Russian military at CNA, a research group just outside Washington.

“I think it is taking a toll over time. Ukraine is able to manage it right now, fix blackouts. And most Ukrainians cities, I’ve seen are enacting electricity conservation. They’re quite dark at night even though they have power,” he added.

Ukraine has been contending with Russian ballistic missiles and cruise missiles since the war began.

“Drones can loiter, which makes them different from a missile, and then decide to dive bomb and explode on impact,” said Kelly Grieco, with the Stimson Center, a Washington think tank.

She says all these Russian weapons require different defenses.

“I don’t think there are enough air defense systems probably in the world to be able to create that kind of impenetrable barrier that we would like to be possible right now,” she said.

President Volodymyr Zelenskyy recently announced the arrival of new Western air defenses. They include a U.S. contribution known as NASAMS, which protect the White House and other government buildings in Washington.

This certainly helps, says Michael Kofman. But integrating different weapons systems is tricky. He noted that Ukraine is now managing 14 separate artillery systems, including many sent from the West this year.

“The issue is that if they get a couple of air defense systems, and they have a few batteries of each, it create enduring challenges for maintenance, for operation, for training,” said Kofman.

These challenges play out daily. At an apartment building in central Kyiv, a Russian missile recently crashed into the third floor, killing an elderly woman.

Power was knocked out in the neighborhood. On the darkened streets, I asked a young man, Vladimir Yanachuk, if Ukrainians were ready for this winter.

As we spoke, the lights suddenly flickered to life in the surrounding apartment buildings. On this night, at least, there would be electricity and heat.

Greg Myre is an NPR national security correspondent currently on assignment in Ukraine. Follow him @gregmyre1.