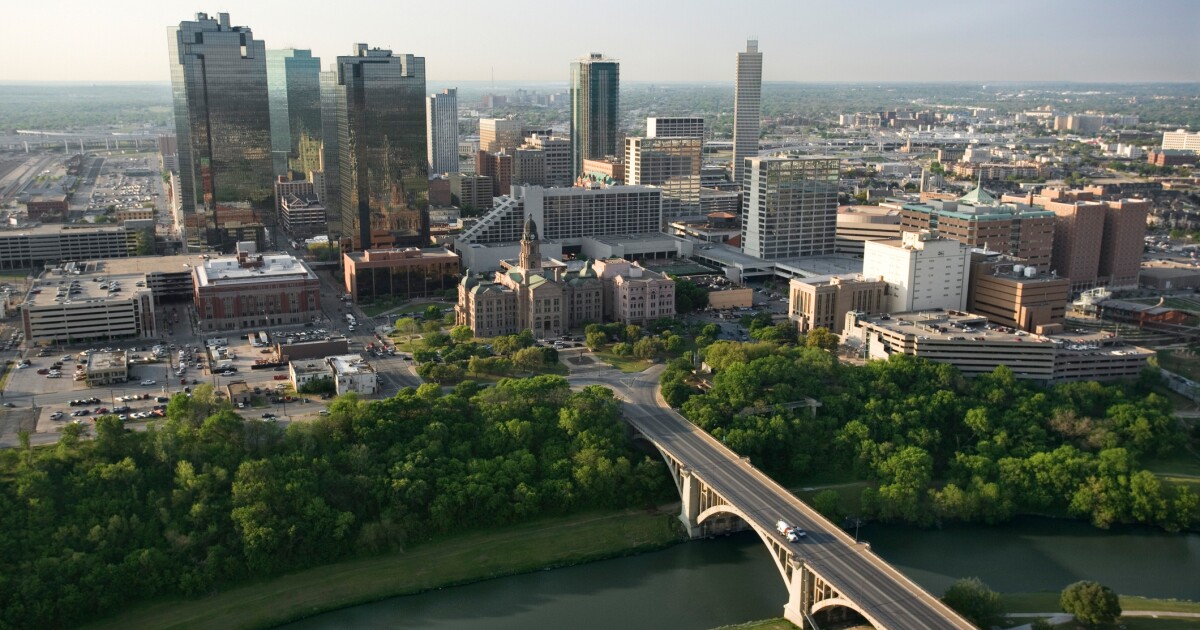 PROSPER, Texas — Almost everything about the opening of the 2019 Prosper High School Eagles’ football season was big.

The game in this Dallas-Fort Worth suburb began with fireworks and a four-airplane flyover. A trained eagle soared over the field. And some 12,000 fans filled the team’s new stadium, a $53 million colossus with the largest video screen of any high school venue in Texas. Atop the stadium was also a big name: Children’s Health.

Business has been good for the billion-dollar pediatric hospital system, which agreed to pay $2.5 million to put its name on the Prosper stadium. Other Dallas-Fort Worth medical systems have also thrived. Though exempt from taxes as nonprofit institutions, several, including Children’s, notched double-digit margins in recent years, outperforming many of the area’s Fortune 500 companies.

But patients aren’t sharing in the good times. Of the nation’s 20 most populous counties, none has a higher concentration of medical debt than Tarrant County, home to Fort Worth. Second is Dallas County, credit bureau data show.

The mismatched fortunes of hospitals and their patients reach well beyond this corner of Texas. Nationwide, many hospitals have grown wealthy, spending lavishly on advertising, team sponsorships, and even spas, while patients are squeezed by skyrocketing medical prices and rising deductibles.

A KHN review of hospital finances in the country’s 306 hospital markets found that several of the most profitable markets also have some of the highest levels of patient debt.

Overall, about a third of the 100 million adults in the U.S. with health care debt owe money for a hospitalization, according to a poll conducted by KFF for this project. Close to half of those owe at least $5,000. About a quarter owe $10,000 or more.

Many are pursued by collectors when they can’t pay their bills or hospitals sell the debt.

“The fact is, if you walk into a hospital today, chances are you are going to walk out with debt, even if you have insurance,” said Allison Sesso, chief executive of RIP Medical Debt, a nonprofit that buys debt from hospitals and debt collectors so patients won’t have to pay it.

A community shadowed by debt

Across the Dallas-Fort Worth metro area — the nation’s fourth-largest — the impact has been devastating.

“Medical debt is forcing people here to make incredibly agonizing choices,” said Toby Savitz, programs director at Pathfinders, a Fort Worth nonprofit that assists people with credit problems. Savitz estimated that at least half their clients have medical debt. Many are scrimping on food, neglecting rent, even ending up homeless, she said, “and this is not just low-income people.”

David Zipprich, a Fort Worth businessman and grandfather, was forced out of retirement after hospitalizations left him owing more than $200,000.

Zipprich, 64, had spent a career in financial consulting. He owned a small bungalow in a historical neighborhood near the Fort Worth rail yards. His daughters, both teachers, and his four grandchildren lived nearby. He had health insurance and some savings, and he’d paid off his mortgage.

Then in early 2020, Zipprich landed in the hospital. While driving, his blood sugar dropped precipitously, causing him to black out and crash his car.

Three months later, after he was diagnosed with diabetes, another complication led to another hospitalization. In December 2020, covid-19 put him there yet again. “I look back at that year and feel lucky I even survived,” Zipprich said.

But even with insurance, Zipprich was inundated with debt notices and calls from collectors. His credit score plummeted below 600, and he had to refinance his home. “My stress was off the charts,” he said, sitting in his neatly kept living room with his Shih Tzu, Murphy.

Overall in Tarrant County, 27% of residents with credit reports have medical debt on their records, credit bureau data analyzed by KHN and the nonprofit Urban Institute shows. In Dallas County, it’s 22%.

That’s more than five times the rate in the largest counties in New York, data shows. The Texans also owe a lot more — the median amount of medical debt on credit records in Tarrant and Dallas counties is nearly $1,000, compared with $400 or less in New York.

Last year, Zipprich returned to work, taking a job in New Jersey that required he commute back and forth to Texas. He recently quit, citing the strain of so much travel. He’s now job hunting again. “I never thought this would happen to me,” he said.

Even small debts can have potentially dangerous consequences, discouraging patients from seeking needed care. Angie Johnson, a 28-year-old schoolteacher, cut short her honeymoon so she and her husband could pay off more than $1,100 she owed a physical therapy center owned by Baylor Scott & White, a mammoth Dallas-based hospital system.

Johnson said the center, where she’d gone after a knee injury, initially said her visits would cost $60. “Then they billed me hundreds,” she said. “I don’t go to the doctor unless I absolutely have to because it’s so expensive.”

Hospital industry leaders blame the patient debt on health insurers, citing the rise of high-deductible plans and other efforts that limit coverage. “The last thing that hospitals want is for their patients to face financial barriers,” said Molly Smith who leads public policy at the American Hospital Association. “Hospitals are in there trying to work on behalf of patients.”

Despite repeated requests from KHN, none of the medical systems around Dallas-Fort Worth would discuss their finances or the debt carried by patients.

But Smith and other hospital leaders point to billions of dollars of free or discounted care that hospitals nationwide provide every year. “Hospitals have been pretty darn generous,” said Stephen Love, president of the Dallas-Fort Worth Hospital Council. “If other parts of the community did as much as hospitals, we wouldn’t be in this problem.”

Unlike drug companies, device makers, and many physician practices, most U.S. hospitals are nonprofit and must provide charity care as a condition of their tax-exempt status.

Regardless of tax status, medical centers in markets with high medical debt do provide more charity care, according to an analysis by KHN and the Urban Institute, a Washington think tank. That’s important, said Dr. Vikas Saini, president of the Lown Institute, a nonprofit that grades hospitals on their quality and community benefits.

But Saini asked: “Is a hospital truly serving its community if it’s pushing so many into debt?”

Around Dallas-Fort Worth, major medical systems frequently tout their commitment to the region and its patients.

When Texas Health Resources, a Dallas-based nonprofit system with more than $5 billion in annual revenue, opened a new hospital tower in Fort Worth earlier this year, Barclay Berdan, the system’s chief executive, said the building “reinforces Texas Health’s long-standing commitment to the Fort Worth community.” The nine-story, $300 million tower is one of more than a half-dozen new hospitals and major expansions around the Dallas-Fort Worth area since 2018.

The big building spree has been accompanied by big bottom lines.

From 2018 to 2021, Texas Health, which owns hospitals in North Texas, had an average operating margin of almost 6%, according to a KHN analysis of publicly available financial reports.

Other major systems in the area, including Baylor, Children’s Health, and HCA, the nation’s largest for-profit hospital company, did even better, KHN found. Cook Children’s, the region’s second major pediatric system, had an average operating margin of nearly 12%.

By comparison, profits at most of the 25 Fortune 500 companies based around Dallas-Fort Worth, such as ExxonMobil, were less than 6% in 2019, according to Fortune data.

Hospitals have thrived in other markets with high patient debt, KHN found.

In Charlotte, N.C., where a quarter of residents have medical debt on their credit reports, hospitals recorded an average operating margin of 13.6% from 2017 to 2019.

The average margin at hospitals in and around Gainesville and Lakeland, two central Florida markets where a quarter of residents also carry medical debt, topped 9%. In Tulsa, Okla., which has the same level of debt, margins have averaged 8.5%.

Overall, U.S. hospitals recorded their most profitable year on record in 2019, with an aggregate operating margin of 6.5%, according to the federal Medicare Payment Advisory Commission. Total margins, which include income from investments, were even higher.

“You might think that hospitals in communities where patients have a lot of debt would be less profitable, but that doesn’t seem to be the case,” said Anuj Gangopadhyaya, a senior Urban Institute researcher who worked with KHN on an analysis of hospital finance and consumer debt data in U.S. hospital markets.

In fact, the analysis found, there is no apparent relationship between the profits of hospitals in a market and how much medical debt residents have. So while hospitals in places like Charlotte and Tulsa may be comfortably in the black, in other places with high patient debt such as Amarillo, Texas, and Columbia, S.C., hospitals are struggling, data shows.

Industry experts say the most profitable medical centers — like those around Dallas-Fort Worth — have developed business models that allow them to prosper even if their patients can’t pay.

One key is prices. These hospitals maximize what they charge for everything from a complex surgery to a dose of aspirin. Most of those charges are picked up by health insurers, which still pay a much larger share of hospital bills than patients do, even those with the highest deductibles.

Across the country, many medical systems have strengthened their market power in recent years by consolidating, buying up smaller hospitals and physician practices, which enable the hospital systems to charge even more.

In addition to charging more, the most profitable hospitals frequently squeeze more savings from their operations, holding down what they pay workers, for example, and securing better contracts from suppliers. “Hospitals have had to get leaner and meaner,” said Kevin Holloran, a senior director at Fitch Ratings who tracks nonprofit health systems for the bond rating firm.

It’s unclear how much longer this business model can endure.

Across the country, many small and rural hospitals have closed in recent years. Even some larger systems are now losing money, as inflation and rising labor costs put new pressure on bottom lines.

As bills rise, hospitals are having a harder time collecting. Last year, nearly 1 in 5 patient bills generated by hospitals for people with insurance topped $7,500, according to an analysis of hospital billing records by Crowe LLP, a Chicago-based accounting and consulting firm. That was more than triple the rate in 2018.

“These are bills that fewer and fewer patients out there can afford,” said Brian Sanderson, a senior Crowe health care consultant and former hospital executive. Indeed, hospitals manage to collect less than 17% of patient balances that exceed $7,500, according to Crowe’s analysis.

“The rates at which patient balances are growing is just unsustainable for our health systems,” Sanderson said, predicting that most will never be able to collect bills of this size. “It’s trending to the ridiculous.”

“They wanted to pull so much shrimp out of the bay that they didn’t think about whether there’d be any there long term,” Earley said, recalling his constituents’ struggles. “I worry that those of us in health care aren’t asking ourselves enough if this system is sustainable.”

Diagnosis: Debt is a reporting partnership between KHN and NPR exploring the scale, impact, and causes of medical debt in America.