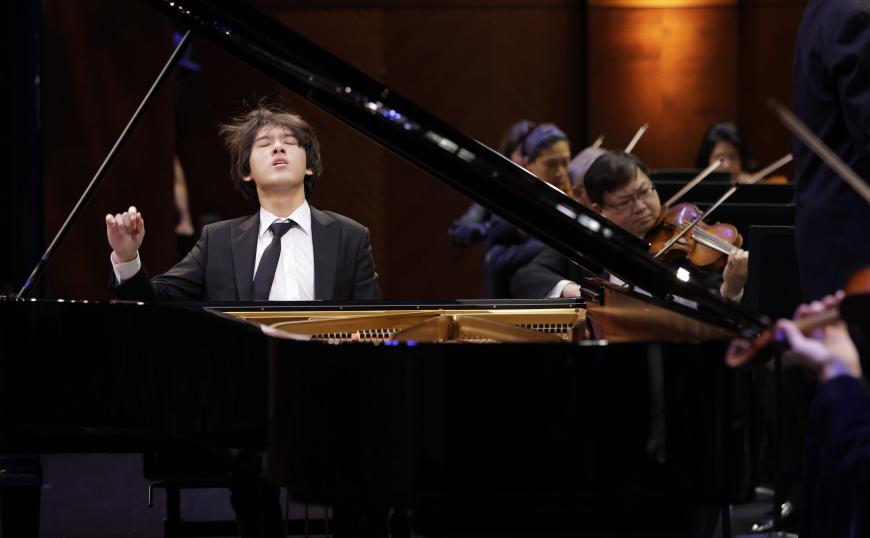 Longtime observers will tell you that not since Radu Lupu in 1966 has the Van Cliburn International Piano Competition crowned a winner of this magnitude, that his technique is out of this world, or that his performance of the Rachmaninoff Piano Concerto No. 3 in D Minor may be the greatest ever.

And they would be wrong on all counts.

Anybody who tuned in to the events in Fort Worth, Texas, this past June came away convinced of two things: There is no substitute for rare talent, and 18-year-old Yunchan Lim of South Korea is, indeed, the real deal. But to compare the young, developing pianist to the late Romanian master — or any former winner — is a disservice both to Lupu and the artist who’s just coming up. How Lim develops now is the real story.

Last Sunday, Sept. 18, Steinway Society – The Bay Area presented Lim’s West Coast debut at the Montgomery Theater in San José, a preliminary view of what might be in store.

The first three of Brahms’s Ballades, Op. 10, found Lim adjusting to the piano, calibrating to the moment. Dark, dense chords were voiced and weighted beautifully with his nearly lifeless hands, and tender phrasing was scattered throughout the Andante movements. Lim had technique to burn and appeared to rely on a safe, academic approach.

By the fourth ballade, Andante con moto in B Major, however, the tide had turned, and one glimpsed what many in Texas and around the world had witnessed. We have seen pianists with all-encompassing technique, but the gift of singing is not given to all. Rich, interwoven melodic lines came into bloom, full of color, and with such fragile grace and lyricism, it was breathtaking.

Like a sprinter who found his stride, Lim dashed into Felix Mendelssohn’s Fantasie in F-sharp Minor, Op. 28 (“Scottish Sonata”), an underperformed virtuoso work, and revealed his expressive powers in the opening Con moto agitato, showcasing an acute awareness of form and structure. Audiences were treated to a mesmerizing Presto movement, with fleet fingers repeatedly running up and down the keyboard without missing a beat.

But none of this truly mattered because what was to come simply blew everything else out of the water.

Stephen Hough, a jury member at the Cliburn, wrote to us that Lim reached “a transcendental height” in the Transcendental Etudes of Franz Liszt. And for a moment, just after the Allegro maestoso ed animato marking in Légendes No. 2, “St. François de Paule marchant sur les flots” (St. Francis of Paola walking on the waves), Lim transported the audience. As if time, the occasion, and the notes themselves were of little import, our minds could see and smell the sand, the small, curling ocean waves by our feet. It was edge-of-your-seat playing, the sort that defies description. But there was more to come.

You would never mistake Lim’s artistry for Vladimir Horowitz’s sorcery, but there was an unmistakable quality of violence to his treatment of Après une lecture du Dante: Fantasia quasi Sonata (After a reading of Dante: Fantasia quasi Sonata) that was irresistibly attractive. With his body angled slightly askew from the audience, Lim went for broke and unleashed a demon at the Presto agitato assai, introducing sudden, voluminous, Horowitzian bass notes.

There was never time to ascertain whether his cascading octaves were faster, if his leaps had the right quality of tone, or if his arpeggios were more ferocious than others. The electricity of the moment was all-encompassing. One was simply lost in communion with the devil.

After an encore of Alexander Siloti’s transcription of Bach’s Flute Sonata in E-flat Major, BWV 1031, a sweat-drenched Lim offered Chopin’s Nocturne, Op. 9, No. 2. And here is a glimpse of his artistic makeup: I have little doubt Lim would have been penalized at the International Chopin Competition if he played the composer’s work as he did on Sunday. It was a highly personal take, one in which the meter was stretched to and fro and ornaments missed the straitjacket of rhythmic fidelity.

But it was the kind of inspired, courageous playing music-lovers have clamored over for decades. For a pianist who spends all day in the practice room, Lim is rather generous about throwing all caution to the wind when he’s on stage. And when the young South Korean is in his element, there are few sounds more ravishing in the world.

Some things are possible only when you give and risk everything. And for that, there is no comparison.