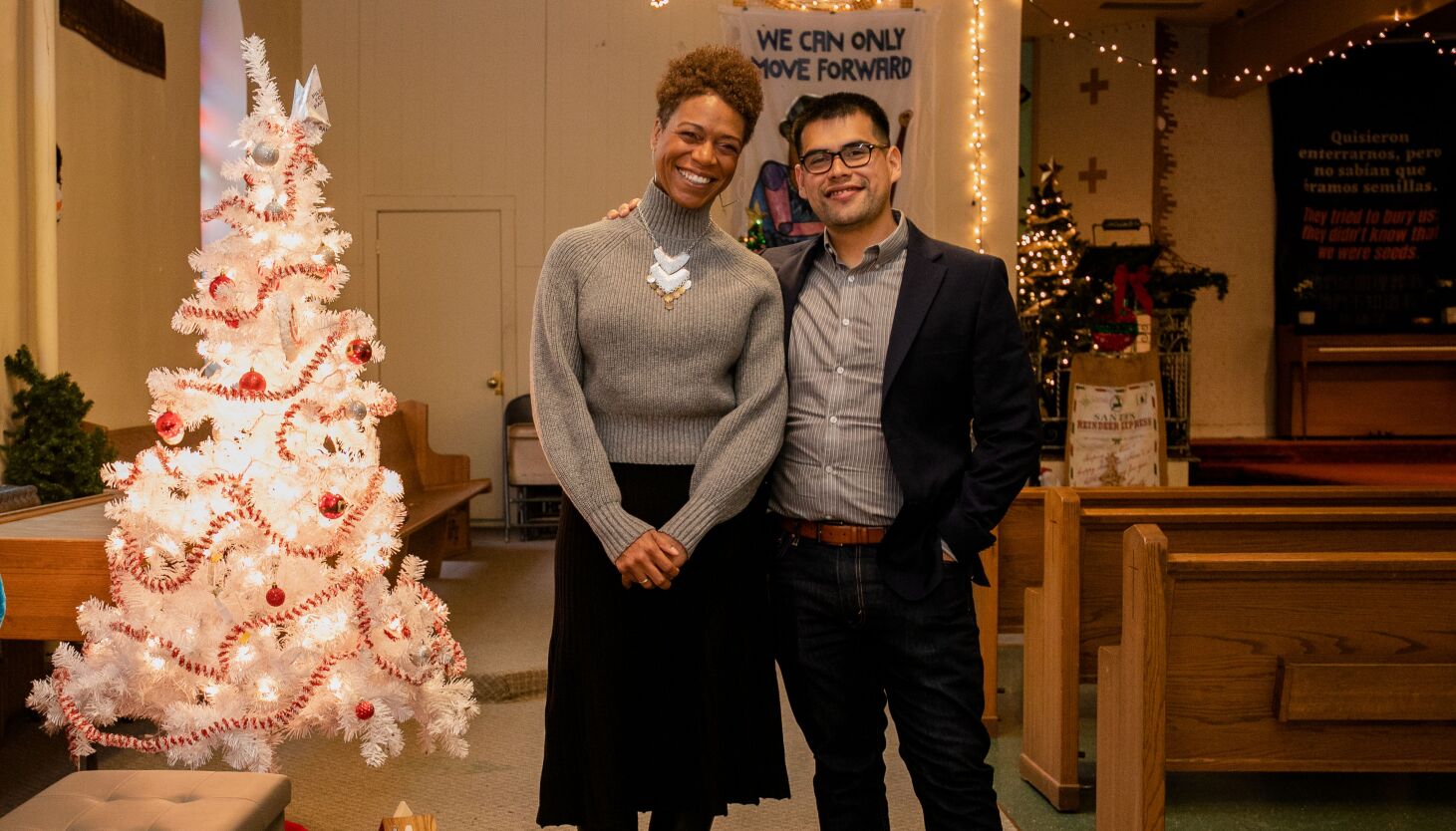 For Daniel and Katrise Chávez, the song and dance started on a bus bound for Pilsen. Strangers then, they began talking, discovered they shared a passion for arts education and, somewhere along the way, began to fall in love.

“It ended up being a really life changing conversation,” Katrise said.

The couple eventually married, founded an organization to bring art and music to students and, on Sunday, will host another in a series of showcases of the programs they support.

For the students, it’s a chance to play alongside professional musicians; for parents, a chance to listen; and for everyone else, an opportunity for people to learn how they can bring arts programming to their community.

A concert put on by their organization, People’s Center for Cultural and Contemporary Arts, is scheduled for Sunday, from 5 p.m. to 8 p.m., at the former Holy Trinity Croatian Church, 1850 S. Throop St. in Pilsen.

The show will include performances from students studying electronic music, traditional Mexican dances and traditional ensemble music. There’s also a jam session with professional musicians and students, a performance by Latin band Temática — and free food.

The organization hosts the showcases every other month with funding from the city’s Department of Cultural Affairs and Special Events.

Started two years ago, the couple’s organization now supports 24 programs at 13 locations between Hermosa on the Northwest Side and Marquette Park on the Far Southwest Side.

The couple started their organization specifically to fill a gap at Chicago Public Schools in arts programming, which they said teaches essential skills, such as problem solving.

“We talk about arts and music as if kids were just playing, but that minimizes the impact of what it does for our young people,” Katrise said.

It brings people together, Daniel said, and shouldn’t be treated as just another extracurricular activity that can be cut when school budgets get tight.

What brought Daniel and Katrise together was salsa music and dance.

The couple met at a downtown bus stop in 2019. When Daniel first saw Katrise, he had a Latin beat playing in his headphones as he watched her shimmy across the street.

“Oh my god, that lady is moving to my music,” he thought, so he asked what she was playing in her headphones. It was salsa too, it turned out.

They began chatting and haven’t stopped ever since.

“We went through a lot in those 30 minutes,” Daniel said, recalling the ride on the No. 60 bus along Blue Island Avenue to the Lower West Side. “We were talking about life and our experiences and, somewhere in there, our educational experiences came up.”

She was a dancer from a military family that moved around the country and had worked as a teacher; he, a musician who grew up in Oregon and studied classical music.

The two new Chicagoans soon found themselves on the same beat.

“By the time we got off the bus, we decided to keep discussing this common theme of accessible arts programming,” Katrise said.

“I wanted to be able to give kids the same opportunities that were given to me,” Daniel said, who learned to play rock and jazz through a similar nonprofit when he was young.

In March, 2020, right before the pandemic and before they were married, they sired the organization, beginning at Dvorak Park, near their home in Pilsen.

“I like playing music because I get a time to forget about the schoolwork I have,” said Ana, a 6th-grader at James Shields Middle School in Brighton Park.

“At school they focus on grades, on whether you can have a good career. It’s a lot of pressure put on kids sometimes,” she said.

Their mother, Maria Orozco, signed the two up after meeting Katrise and hearing about the program.

“I’m so happy to have them do something together at this age,” she said. “As a mother it’s very special and I’m sure they’ll have memories from it.”

When she attended public schools in Chicago and Michigan, she said, nothing like this was offered. But more than the notes, the people make it special.

“It’s the attention the kids get from professional musicians who can be role models,” she said, referring to Katrise, Daniel and the other instructors.

“A smile,” she said. “They have great, positive attitudes.”

Michael Loria is a staff reporter at the Chicago Sun-Times via Report for America, a not-for-profit journalism program that aims to bolster the paper’s coverage of communities on the South Side and West Side.