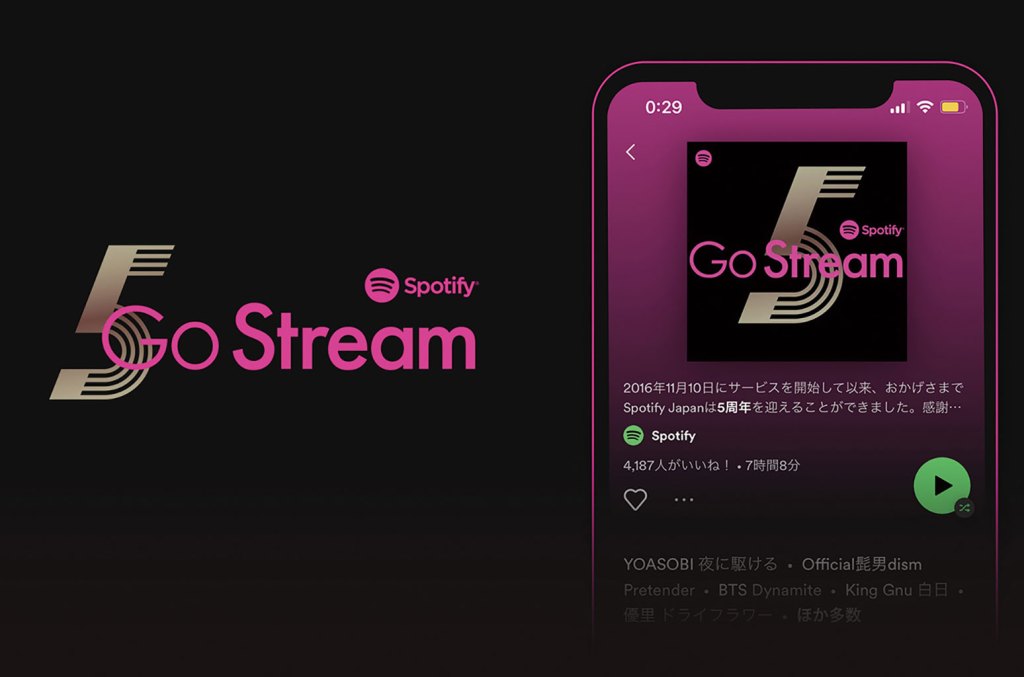 Since its launch in Japan in the fall of 2016, Spotify has been transforming the way of listening and how artists and music fans discover each other through playlists and personalized listening experiences. The service has also brought innovation to the way artists and fans strengthen engagement with various innovative features such as Lyrics, “Singalong” that enables users to sing with their favorite artists by adjusting the vocal volume, “Liner Voice+” that allows artists to share behind-the-scenes stories of their songs on an album, and an integration with the local ticketing application.

Go Stream is the latest offering by Spotify that aims to provide listeners with a beyond-listening music experience, while also at the same time supporting the creative expression of artists in a new way. The first of the series was dropped in July, featuring Zutomayo (aka Zutto Mayonaka de Iinoni) and Vaundy, who gained the mainstream success after they were selected for Spotify’s emerging artist support program in Japan, “RADAR: Early Noise.” And this time, as the second round, Spotify teamed up with three J-pop artists who have increased listeners both domestically and globally through streaming.

For example, superstar singer-songwriter Hikaru Utada’s “One Last Kiss” — the theme of the animated movie Evangelion: 3.0+1.0 Thrice Upon a Time — dropped in March 2021 and debuted at No. 1 on the J-pop charts in nine countries and regions, mainly in Asia, as well as entering the top 100 on the all-genre charts. The J-pop icon with a stellar career spanning back to the late 1990s surprised fans by making her music festival debut on the main stage at Coachella this year.

J-pop hitmaker Gen Hoshino’s new song “Comedy” (the ending theme song of the TV anime series SPY x FAMILY) was ranked in the Spotify Global Viral Chart soon after being released digitally in April. It also reached No. 1 on the Spotify Viral Charts in the markets such as Taiwan, Korea, and Hong Kong. It also ranked high in the Viral Charts not only in the Asian markets like Vietnam, Thailand, Malaysia, and the Philippines, but also in North and South America — the U.S., Canada, Chile, and Peru. In June, the song was also featured in the singer-songwriter’s virtual concert on Fortnite’s Soundwave Series, where he performed six of his hits including “Comedy,” “Fushigi,” and “Koi,” Billboard Japan’s song of the year for 2017.

Mrs. GREEN APPLE, which is now a 3-member band consisting of frontman Motoki Ohmori, guitarist Hiloto Wakai, and keyboardist Ryouka Fujisawa. The popular pop-rock band has also expanded listeners even beyond the geographical boundaries via streaming. While they were taking a break from music, six of their songs — “Ao to Natsu,” “Inferno,” “Tenbyou no Uta feat. Sonoko Inoue”, “Boku no koto”, “Romanticism” and “WanteD! WanteD!” — have hit 100 million stream counts. “Ao to Natsu” and “Inferno” in particular have even surpassed 300 million streams to date.

The brand-new exclusive videos by these three acts are all vertical to accommodate well for viewing on smartphones. Utada created a clip of herself performing “Somewhere Near Marseilles,” an acid house track over 12 minutes long off her eighth studio album BAD Mode released in January. The video was shot in Japan’s Hakkeijima Sea Paradise aquarium at night after closing time to visualize the concept of a special live performance by the star in a night club where all the floors have an ocean view. The aquarium was made to look like a dance floor, and the sight of Utada singing and dancing with hammerhead sharks and sunfish drifting like spaceships in the tanks behind her is magical. The mysterious floating objects that appear in the latter half of the song could be a nod to Floating Points, the song’s co-producer.

Gen Hoshino’s video is a stark contrast to Utada’s in that his performance was shot in a single take in a tiny studio space with his usual band members: Ryosuke Nagaoka on guitar, Jungo Miura on bass, and Hirotaka Sakurada on keyboards. The intimate and laid-back performance — evocative of the Tiny Desk Concert series on NPR Music — reminds us of the fun and warmth of being close to each other after the long period of having to socially distance ourselves because of the pandemic.

Check out Spotify’s Go Stream series making you feel closer to the world view of artists in a unique and exciting way.