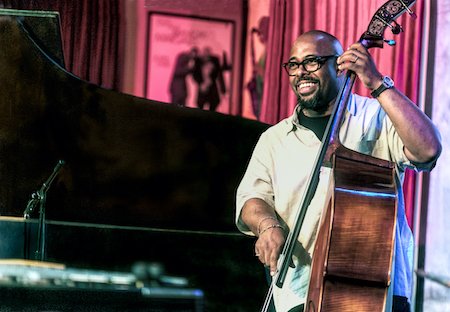 Christian McBride never strays too far from his bass, not even when he’s offstage. Not when he’s producing an international jazz festival, or running an intensive workshop, or broadcasting a radio show.

His bass informs just about every aspect of his professional life. “The primary role of a bass player is to support, and it’s the same in anything else that I do,” McBride said in a video call from Los Angeles, where he was on tour with the Joshua Redman MoodSwing Quartet. “I don’t necessarily like the spotlight. I like making things comfortable for the person who has the spotlight. I like being the person no one notices until I’m not doing my job well.”

This year, DownBeat readers shine a spotlight on McBride precisely because he does his job so well. In the 87th Annual DownBeat Readers Poll, fans voted McBride Artist of the Year, Bassist of the Year and Producer of the Year.

McBride wears each of these titles, along with a few others, quite easily. So easily that it’s hard to grasp how such a prolific musician can give as much as he does to each and every project. It all comes back to playing, he says.

“[Managing everything] is not that much different from my role in the band, from what I do as a bass player,” he explained. “It’s like, ‘Hey, what are the chords? Give me the music, and I’ll improvise.’ I look at the chart and play accordingly, inside of that framework. And most of the time, what I play is kind of OK.”

That McBride’s musical abilities are magnitudes beyond OK was apparent early on. After he moved to New York from his native Philadelphia in 1989 — he had a partial scholarship to Juilliard — news of his talent spread quickly among established players, who started hiring him for club dates. A year in, McBride left the prestigious conservatory to go on tour with trumpeter Roy Hargrove, another gifted newcomer. Prominent sideman gigs followed with legends like Freddie Hubbard, Pat Metheny, Sonny Rollins and Chick Corea.

At the same time that McBride was gaining valuable experience on high-profile bandstands, he was strengthening his connections with peers like Hargrove and Redman — the young torchbearers who would carry modern jazz into the new millennium. It was in 1994 that McBride debuted as a leader on Verve (Gettin’ To It), just a few months after Redman released MoodSwing (Warner Brothers), the first album from the saxophonist’s once-in-a-generation quartet featuring McBride, pianist Brad Mehldau and drummer Brian Blade. The quartet’s second album wouldn’t come around until 26 years later.

Doubtless the onrush of success is to blame for the belatedness: Over the last three decades, McBride and his cohort have reached the peak of jazz celebrity, with the constant crush of obligations that such notoriety entails. Even by celebrity’s demanding measures, however, McBride’s accomplishments as a player are dizzying in scope, comprising hundreds of recordings, inveterate touring and countless appearances with elite musicians in the jazz, R&B, pop/rock, soul and classical worlds.

Remarkably, the ensembles under his leadership, each with its own musical ethos, have remained stable over the years. Of these, the longest-running is the Christian McBride Band (with saxophonist Ron Blake, keyboardist Geoffrey Keezer and drummer Terreon Gully), formed more than 20 years ago. The most traditionally oriented group is his quintet Inside Straight (with drummer Carl Allen, saxophonist Steve Wilson, pianists Eric Reed or Peter Martin and vibraphonist Warren Wolf), began in 2007 as a live performance band only. They’ve since released three albums. The largest ensemble is the 17-piece Christian McBride Big Band, which landed a Grammy in 2012 for The Good Feeling (Mack Avenue).

This September, McBride presented his eighth ensemble, unnamed as of this writing, at the Blue Note in New York for a six-day residency. The wildly improvisatory quintet (with saxophonist Nicole Glover, guitarist Ely Perlman, pianist Mike King and drummer Savannah Harris) claims new territory for McBride.

“It’s my first band of all Gen Z’s,” he said. “And it’s been very interesting to be the senior spokesperson for this particular band. That’s the one thing I love most about being involved in jazz education, that I get the heads-up on a lot of incredible younger players before they really hit the scene.”

For McBride — as much a visionary as a traditionalist — bringing up new players is part of the gig. Players learn by playing, so what better way to teach than by giving emerging jazz artists the chance to play at a professional level?

McBride’s interest in jazz education developed in parallel to his burgeoning career. In 2000, a decade after he left Juilliard to become a touring musician, McBride agreed to serve as artistic director of the Jazz Aspen Snowmass Academy, an all-scholarship summer program for up-and-coming musicians. The quality of the students blew him away.

“[JAS Academy] is like a farm team for the Yankees,” McBride said, now more than two decades into his tenure with the Colorado-based not-for-profit. “Everybody who has come through there has been just a high-level, top-notch musician.”

Closer to home, McBride saw, firsthand, how music education not only benefits exceptional students but fills a community need. In 2003, singer Melissa Walker — McBride’s wife since 2005 — launched Jazz House Kids, then a fledgling after-school program for communities in and around Montclair, New Jersey, where they live. At the time, music curricula in area schools were diminishing at an alarming rate, and Jazz House Kids helped to fill the void left behind. McBride signed on as creative director.

Today, Jazz House Kids occupies a 40,000-square-foot space in downtown Montclair and serves about 2,000 students a year. Young musicians in the ensemble-based program get to perform at places like Jazz at Lincoln Center and City Winery in Manhattan, and as part of the Montclair Jazz Festival.

As dedicated to jazz education as McBride is, it’s likely that much of his insight into what works derives from his own formative experiences. Growing up in Philadelphia, he participated in the Settlement Music School’s afternoon jazz program, along with fellow students Kurt Rosenwinkel and Joey DeFrancesco. He credits this kind of early specialized training with much of his professional success.

“I believe that every major musician that’s in our jazz community came through some sort of program like that,” McBride said.

“You can’t point to one significant musician who didn’t come through some program,” he continued. “It didn’t have to be a huge program. Just a program that cared, you know? And still, today, you’ve got to spend so much time trying to convince the powers-that-be that the arts are important.”

McBride goes on to assert that the “front liners” in jazz education — those who work tirelessly to sustain the art form — are part of a valuable cultural ecosystem. The students, with their fresh takes on jazz, are part of that ecosystem, too.

“As [the young musicians] get playing opportunities, the scene stays alive, and the creative circulation keeps going,” he said. “It keeps it interesting for them, and when I play with them, they make me excited. They keep me getting better as a bass player. All of this stuff — education, playing, curating, broadcasting, whatever it is — it’s all one body of life. It’s one body that we all, collectively, keep alive.”

McBride brings this same holistic view to his curatorial endeavors. An avowed “musicology nerd,” he currently serves as artistic director at two of the most historically important jazz organizations in the world: the National Jazz Museum in Harlem (since 2005) and the Newport Jazz Festival (since 2016). For the last 10 years, he’s also worked as artistic advisor for jazz programming at the New Jersey Performing Arts Center (NJPAC), where he oversees the annual TD James Moody Jazz Festival. And as host and producer of two jazz-themed radio shows — NPR’s Jazz Night in America and Sirius XM’s The Lowdown: Conversations with Christian — McBride’s influence as a champion of the art form now extends to a multitude of listeners.

“I don’t do all of this managing on my own, obviously. It helps to have a really good team,” McBride said with a laugh. “[My schedule] is extremely regimented, which is the opposite of my natural being. I love being in the moment, and I don’t like the fact that I can’t be in the moment anymore. There are so many things going on, I have to watch my calendar every minute of the day. But there’s a really good group of people around who help me not get lost in the sauce.”

To appreciate just how tricky organizing McBride’s commitments must be, consider this grinding schedule: In mid-November, the bassist returns from the European leg of the long-awaited MoodSwing tour, the quartet’s first run of concerts together since the mid-1990s and a follow-up to its recent studio releases for Nonesuch — the Grammy-nominated Round Again (2020) and Long Gone (2022).

In late November, just a few days back Stateside, he joins the James Moody Jazz Fest on stage at NJPAC in Represent! A Night of Jazz, Hip-Hop and Spoken Word. The next night, he closes out the festival as a judge for the Sarah Vaughan International Jazz Vocal Competition, one of the world’s foremost contests for jazz singers.

Early December sees his annual two-week residency at Village Vanguard, the first with Inside Straight and the second, perhaps, with the new, unnamed band. Then, he starts 2023 with two weeks headlining on the Blue Note Jazz cruise to the Caribbean. Soon thereafter, he departs for several non-consecutive weeks of touring throughout the U.S. with New Jawn. And then, if all goes as usual, it’s the JAS Academy in July, the Jazz House Summer Workshop and the Newport Jazz Festival in August, and the Montclair Jazz Festival in September. Plus everything else in between.

But McBride remains unfazed when reviewing this crowded itinerary. Again, it all comes back to playing.

“With all of the things that are going on, the most important thing for me remains being the best bass player I can possibly be,” he said. “I’ve noticed that when certain responsibilities start to take shape, it’s easy to get away from your instrument. But I make sure that I always play the bass to the best of my abilities, because that’s what brought me to this dance.” DB