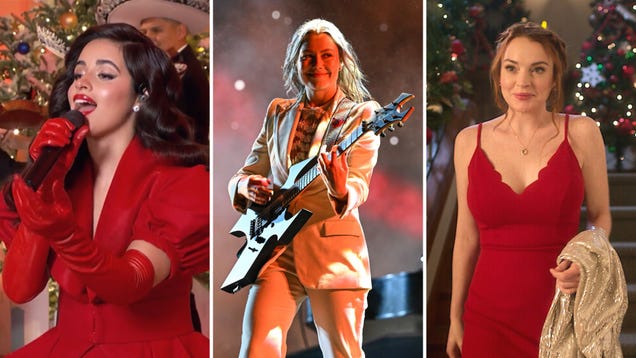 Christmas music is like marital infidelity or multi-level marketing: People keep trying it, even though they shouldn’t, and getting away with it is hardly guaranteed. But the pop music machine keeps churning, and it’s that time of year, and so we have a fresh crop of attempts at timelessness that largely will not pan out. Up this year are new tracks from the likes of the Backstreet Boys, Sia, Alicia Keys, Camila Cabello, and Lindsay Lohan singing “Jingle Bell Rock”—again!

Notably, there’s also a large swath of new Christmas music from major artists like Lizzo and Kane Brown that is being released exclusively via Amazon Music, and as a result is not embeddable in full-length form, thus has not been reviewed here. Platform exclusives? That’s not in the spirit of giving! It is, however, in the spirit of capitalism, which means it’s perfectly Christmassy.

In this slideshow, we run down 10 new Christmas songs for ‘22 and their (completely subjective) chances of sticking around for years to come.

This is a spritely update of a song that is too often too maudlin, with horns and an acoustic guitar giving it a Latin flair. Cabello’s voice is as bleary as a kid’s on Christmas morning and, intriguingly, she pronounces Christmas like “Cwismois” on some, but not all, references. In this economy, that counts as personality.

Lindsay Lohan’s, uh, long-awaited return to music is upon us in the form of this cover of “Jingle Bell Rock.” It’s from her recent Netflix movie Falling for Christmas, and an unsubtle callback to Mean Girls, in which Lohan performed the Bobby Helms cover alongside her fellow Plastics. Falling for Christmas is, itself, a reference, both to Overboard, from which its plot borrows liberally, and a time when Lohan was a regularly working actor. Which is to say that Lindsay Lohan is referencing Lindsay Lohan here in multiple ways. While the meta-ness works overtime, Lohan delivers a rather straight vocal that suggests she merely showed up and did the work. But hey, at least she showed up!

For those who finds sleigh bells and ‘80s synths too edgy, the Backstreet Boys have sanded down Wham!’s “Last Christmas” to something that will not disturb your Marshall’s shopping experience. There’s not a singer in the group who could touch George Michael on his worst day, and there’s no reason for any programmers to play this one over the original. And yet, the video has amassed some 3 million views since dropping three weeks ago, which shows that for whatever reason there is an audience for this. Congrats to everyone involved.

This lovable, ‘70s-inflected confection is like a new Starbucks holiday drink that isn’t destined to be trotted out a second year. (It’s also like a Hennessy commercial, or at least its video is.)

A holiday as gaudy as Christmas calls for power chords. This band of teens, who went viral last year with “Racist, Sexist Boy,” understands that, and they turned out a blast of peppy pop-punk that references ghosts of Christmas past and is over before you know it. Kind of like Christmas itself.

As much as I love it when a putatively straight dude uses queer vernacular like “it’s giving” (see Drake’s “A Keeper”), “It’s Giving Christmas” is one example that I wish came with a gift receipt. (It’s exchanging…for some sensible socks!) “Giving” is a mush-mouthed, mush-everythinged, ADHD-inspired string of dispassionate yuletide cliches (“Got a mistletoe so let’s kiss under it/Let’s make a snow angel/Listen now for some reindeer/Show some love to a stranger”). The stock R&B production and autotune will sound dated come December 26, if not earlier.

Phoebe Bridgers – “So Much Wine”

Phoebe Bridgers turns in a slowed-down, melancholic take on the Handsome Family’s “So Much Wine,” a song about heavy drinking that is really only tangentially about Christmas. Sad! (But pretty!)

This sounds like Meghan Trainor after so much eggnog.

Pentatonix – “Prayers for This World”

Everyone’s least favorite acapella presence in pop is on its sixth Christmas album. Here they are bothering us with some instrumental backing (and some clicks and beat boxing) and a global message of, uh, prayers. Why not start with prayers for your listeners? Pray for mojo, even.

Did you know that Debbie Gibson’s newly released Christmas album is called Winterlicious? Saucy! This ballad about not being with the one you love on Christmas is more winterpressive than -licious, though. (Points subtracted for rhyming “Heartbreak holiday” with “cold as winter’s day”—in the chorus, no less!)