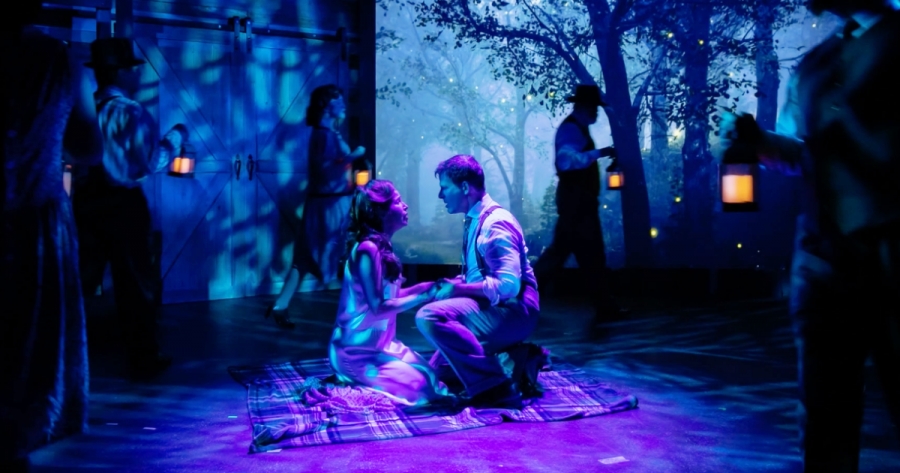 A Kalamazoo College faculty member is receiving accolades from a Michigan theatre organization for the fifth time in his career. Theatre Arts Professor Lanny Potts was selected recently as the recipient of a 2022 Wilde Award for Best Lighting as a result of his work in the 2021 Farmers Alley Theatre production of Bright Star, a musical written and composed by actor, comedian and songwriter Steve Martin and songwriter Edie Brickell.

Wilde Awards are distributed through EncoreMichigan.com, a web-based publication focusing on the state’s professional theater industry, highlighting the top productions, actors, artists, designers, writers and technicians. Potts previously earned Wilde Best Lighting honors through his work at Farmers Alley Theatre in productions such as The Light in the Piazza in 2012 and Bridges of Madison County in 2018.

In Bright Star, a literary editor, Alice Murphy, meets a young soldier, Bill Cane, who is just home from World War II. Her flashbacks to the 1920s tell the audience about 16-year-old Alice meeting Jimmy Ray Dobbs and giving birth to a son. The love story, inspired by real events and set in the American South, provided Potts and the Farmers Alley Theatre team with some distinctive challenges of how to move the story forward with lighting and other effects.

“Working closely with the brilliant Director Kathy Mulay, every scenic transition was created with lighting which then constantly moved until the downbeat of the next music, scenic or narrative moment,” Potts said. “Picture slowly moving tree leaves. In every transition moment, they would create an almost ripple effect, like wind through the leaves, that continued until the music resolved or carried us through to the next narrative moment. Having the lights breathe the music of each transition was an approach that allowed the team to seamlessly meld action, dialogue, music, blocking and projections in a way that helped the audience understand that our narrative was a constantly moving story.”

Potts has presented portfolios of his work at regional conferences, worked at the John F. Kennedy Center for the Performing Arts, and received many professional awards including a Michigan Governor’s Commendation, a design commendation from the John F. Kennedy Center (Fun Home) and Atlanta Critic’s Choice awards for his design work for the Atlanta premier of A Few Good Men. But each opportunity inspires Potts for what he will do with the next one.

“When I think about having the privilege of doing what I love, I don’t think about a particular show, production or artistic team,” Potts said. “I do have warm fuzzies when I reflect upon some great work accomplished collaboratively with so many great artists. But I think I’m a looking-forward kind of person, where one scenic idea, one costume idea or one directing idea inspires a unique new direction for the artistic team. There is no greater gift than working with talented artists who care about the work as much as you do, who will challenge your own ideas, and inspire you to pursue new ones. I also think the very nature of light requires us to look forward and not dwell upon past work. Lighting is so ephemeral, so in the moment, that once a production is complete, I’m ready for the next artistic team I get to work with, the next production I get to work upon, the next set of problems we get to resolve, the next story to be told.”