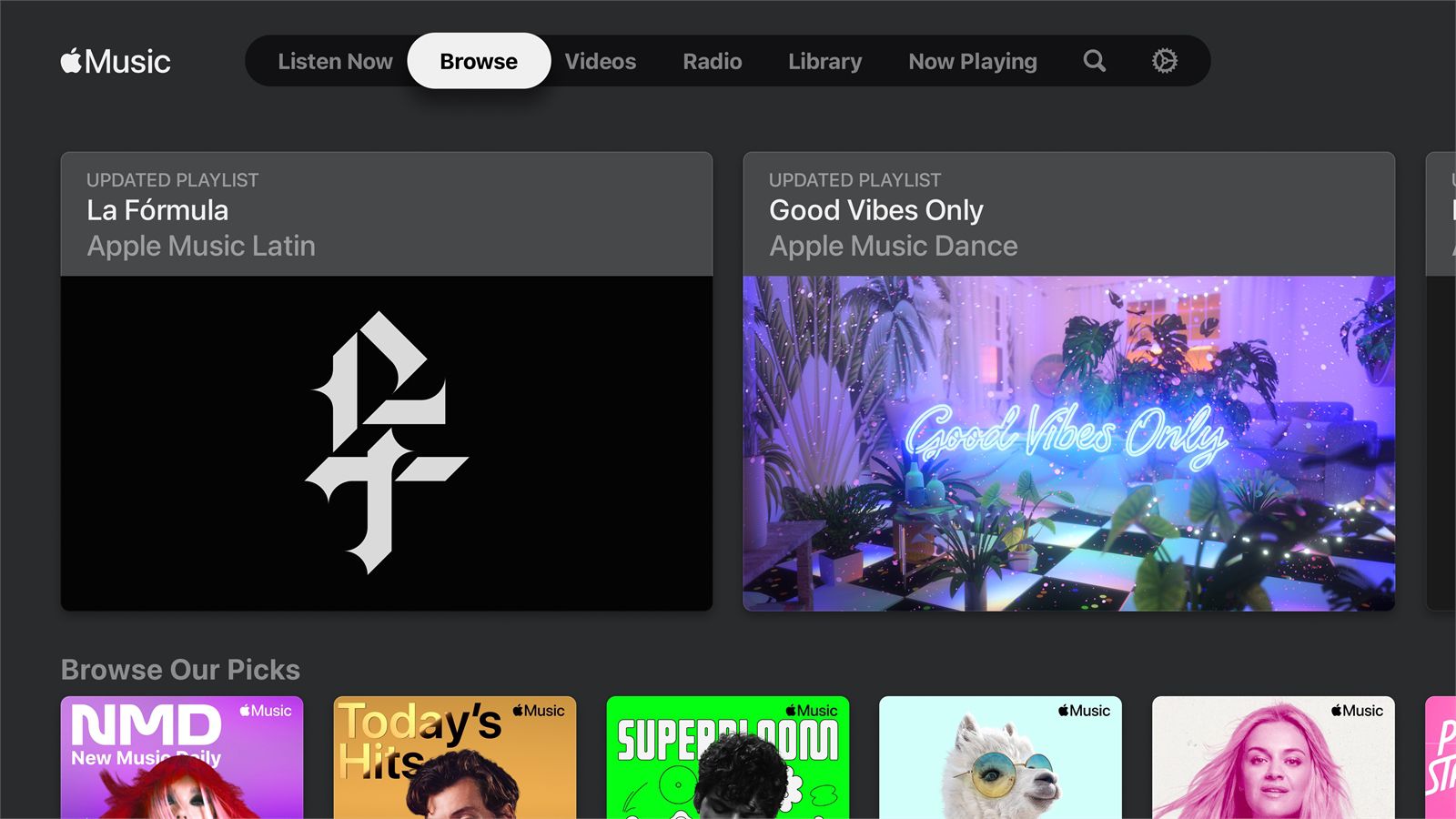 Apple Music is now available on the Microsoft Store for the Xbox Series X, Xbox Series S, and Xbox One, providing subscribers with access to the streaming music service, complete with large album art, full-screen time-synced lyrics, and more. As noted by users on Reddit, music can be played in the background while gaming.

The app is similar to the one available on tvOS for the Apple TV, with a top navigation bar for Listen Now, Browse, Videos, Radio, Library, and Now Playing. Apple Music launched on the PlayStation 5 last year and is also available on select Samsung and LG smart TVs, Roku, Android, Amazon Echo, Sonos, Google Nest, and Windows via iTunes.

Apple Music recently surpassed 100 million songs available, but Apple has not revealed how many subscribers the service has in several years now. Apple Music’s largest rival Spotify was already available on Xbox, along with Amazon Music, Deezer, and others.

The Verge‘s Tom Warren shared a brief preview of the Apple Music app for Xbox:

Update: Microsoft has announced that an Apple Music app, Apple TV app, and iCloud Photos integration are coming to Windows.

Apple today celebrated reaching the milestone of 100 million songs on Apple Music and commented upon two areas where it is working to improve the service. Reflecting on the growth of music on Apple’s platforms in a press release, Apple Music’s global head of editorial Rachel Newman today said:One hundred million songs. Twenty-one years on from the invention of iTunes and the debut of the …

Apple Music is available on the PlayStation 5 from today, offering the first fully integrated Apple Music experience on a game console, Sony has announced. The news comes after weeks of the Apple Music app intermittently appearing for PS5 users with no official word on the development from Apple or Sony. Apple Music on the PS5 allows subscribers to play more than 90 million songs, as well as …

Apple Music is now available directly within Google-owned Waze, offering Waze users easier and safer access to enjoy the Apple Music catalog as they commute from within the Waze app on iOS. Google announced the new integration in a blog post, saying “with a direct connection between the apps, you can now access Apple Music content directly from the Waze Audio Player.” Users should make sure…

Apple today announced that it will begin livestreaming select concerts through Apple Music, starting with a Harry Styles performance this Friday at UBS Arena in New York. Apple Music subscribers will be able to watch free of charge around the world. The concert series is named “Apple Music Live” and is reminiscent of the “iTunes Festival” (later rebranded as the “Apple Music Festival”), a…

Five New Features Coming to Your iPhone With iOS 16.1 Later This Month

In a few weeks, Apple will release iOS 16.1 for all compatible iPhones, marking the first major update to the iOS 16 operating system since its public release in September. With iOS 16.1, Apple is bringing several new changes, features, and bug fixes to iPhone users. We’ve highlighted five noteworthy changes below. iOS 16.1 is currently still in beta testing with developers and public beta…

Apple today released iOS 16.0.3, a minor bug fix update that comes a few weeks after the launch of the iOS 16 operating system. The iOS 16.0.3 update follows iOS 16.0.2, software that addressed a number of launch day bugs on the iPhone 14 models. The iOS 16.0.3 update can be downloaded on eligible iPhones over-the-air by going to Settings > General > Software Update. According to Apple’s…

These 10 U.S. States Will Let You Add Your Driver’s License to Your iPhone

Earlier this year, Apple launched a feature allowing residents of participating U.S. states to add their driver’s license or state ID to the Wallet app on the iPhone and Apple Watch, providing a convenient and contactless way to display proof of identity or age. As we wait for IDs in the Wallet app to expand to additional U.S. states, here is everything you need to know about how the feature …

The fourth-generation iPhone SE will feature a 6.1-inch LCD display and a “notch” cutout at the top of the display, according to Display Supply Chain Consultants (DSCC) analyst Ross Young. Young told MacRumors that he has revised his expectations for the fourth-generation iPhone SE. In October 2021, Young, who has a very good track record when providing insights into Apple’s plans, said that …

iPadOS 16 Expected to Launch in Final Week of October

Apple plans to release iPadOS 16.1 in the final week of October, barring any new software bugs or issues, according to Bloomberg’s Mark Gurman. In a tweet today, Gurman said iPadOS 16.1 is on track to be released the week of October 24. Apple will likely release iOS 16.1 at the same time as iPadOS 16.1 given that the latest beta of each update have the same build number. Given the delay,…

One of iOS 16’s Best Features Drains Battery When Enabled

One of iOS 16’s most praised features comes at the cost of draining battery life, according to recently published Apple support documents. The feature, known as “keyboard haptics,” is optional in iOS 16 and allows users to get physical feedback via slight vibrations upon the touch of each key, confirming that it was pressed much like keyboard sounds. The feature is a useful addition to the…

Back in May, analyst Ming-Chi Kuo claimed that a new Apple TV would be released in the second half of 2022. Last month, Bloomberg’s Mark Gurman also said that a new Apple TV was “getting closer” and “could potentially launch this year.” With a new version of the Apple TV potentially on the horizon, here are four rumored features and changes for the streaming box. Faster chip: Gurman said…

What to Expect From Apple Through October: New iPad Pro, iOS 16.1, and More

While it looks increasingly likely that Apple will not be holding an October event this year, the company still has a lot on its agenda this month, with multiple new product launches and software releases expected over the coming weeks. With the iPhone 14 Plus launch in the rearview mirror, we have recapped what else to expect from Apple through the remainder of October below. iPadOS 16…