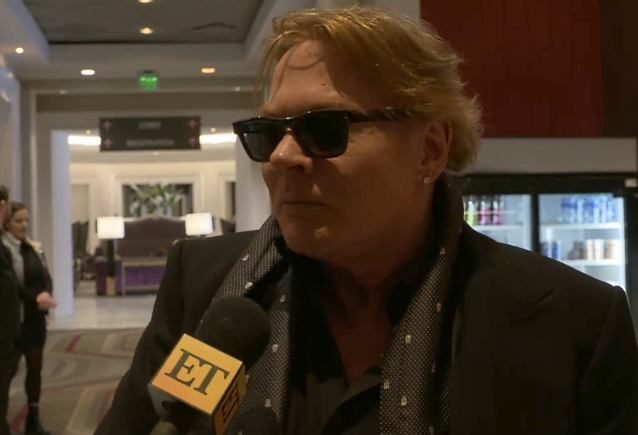 GUNS N’ ROSES frontman Axl Rose admitted that he was “nervous and emotional” when he spoke and performed at a memorial on Sunday (January 22) to celebrate the life of Lisa Marie Presley, who died at 54 on January 12.

“I didn’t really know I was going to speak or anything,” Rose told Entertainment Tonight‘s Kevin Frazier after the event (see video below). “I still feel like, I don’t know, that I deserve to be here, but I wanted to try to do right by her and her family and her fans. So it meant a lot. I was pretty nervous and emotional up there.”

“It was my understanding, she had actually talked about if the situation … so that’s why I was asked to do it,” Axl said of performing the GUNS N’ ROSES classic 1991 ballad. “Of course, I had to be here.”

Prior to his performance, Rose delivered a speech in which he said about the only daughter of Elvis Presley: “With Lisa‘s passing, I knew if I was invited, I needed to come to these ceremonies. I hadn’t planned on speaking, and when I was put on the spot, I really didn’t know what to say. And I was tongue-tied and nervous. And I didn’t even really know what I said. But I, as I’m sure many of you are still in shock, as I feel I’ll continue to be for quite some time. I feel like I’m supposed to be texting her, like right now, saying I’m here, telling her how wonderful everyone is.

“I never in a million years imagined singing here, and especially under these circumstances,” he continued. “This is truly devastating and I’m sure excruciating for everyone here and all of those affected by her passing. At the same time, one can see how hard everyone’s worked, and is working, to make this as beautiful for Lisa as it can be and is. I’m honored to be here for Lisa and her family.

“I don’t know that I deserve to be here, especially speaking amongst those that have known Lisa for longer and were much closer than her and I, especially her family and those that have known her most of their lives or even all of hers. I do know Lisa loved her family very much, and was fiercely protective of her father, his legacy and both her love for him and his love for her.

“She was extremely proud, as proud as anyone could ever be of her father and his many accomplishments, his place in music, America and American and world history. She was also very proud of the ‘Elvis’ movie, and how she felt it portrayed her father, and the care that was put into the film by those involved — Mr. Luhrmann‘s vision and direction, and Austin Butler‘s dedication to the role of her father.

“With Ben‘s passing, Lisa‘s life, and the rest of her family, and his loved ones, took a turn down a hard road that she was honoring to the best of her abilities, seeking out help and choosing to help others who experienced or were experiencing such a loss and pain.

“We are gathered here today to pay our respects to Lisa and her family, and to share our memories, console one another to the degree that we’re able. And though under such difficult, heartbreaking and somber circumstances, also to celebrate the life of a friend, a loved one, a beautiful and good soul and a cherished and deeply missed family member.

The Duchess of York gave a “tribute to the children” of Lisa Marie, following opening remarks and a rendition of “Amazing Grace” by Jason Clark and The Tennessee Mass Choir.

The 60-year-old Rose previously told People in an exclusive statement: “I will miss my friend Lisa. Her passing, just as her son’s, or as a kid, her father’s, doesn’t seem real. Lisa loved her family, all her children. My heart goes out to them.”

In 2020, Lisa Marie Presley‘s son Benjamin Keough died by suicide at the age of 27.

“Her son’s passing was shocking, tragic and devastating,” Axl said. “It was something that, at a point, you obviously didn’t want to bring up but awkwardly would in an effort to let her know you cared and were thinking about her, about them, and to be of any comfort one could, which she appreciated.

“I wanted her to be happy, to feel good about things, at least as much as one could under the circumstances. And really, with the closeness of their relationship, one could hope — but truthfully, it didn’t seem, at least without some real time passing, a reasonable reality.”

He continued: “What comes after life who knows but I’d like to think they’re together, her and Ben with her father and Ben‘s grandfather in some way, and Lisa, and the most important men in her life are happy together.”

Lisa Marie Presley was most recently seen on January 10 at the Golden Globe Awards, which she attended with her mother Priscilla Presley to support the Baz Luhrmann film “Elvis”, about her late father.

Lisa Marie Presley was interred last week at Graceland, next to her late son.