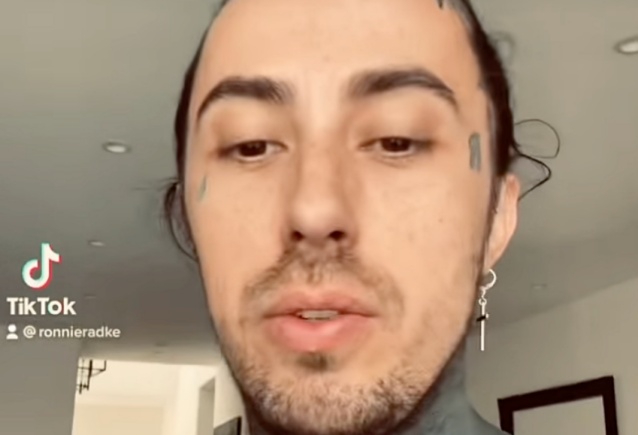 FALLING IN REVERSE has been criticized by fans for pulling out of this year’s WIIL Rock festival over “missing” laptops.

Just hours before the Ronnie Radke-fronted outfit was supposed to appear at the one-day event on Saturday, September 24 at Lake County Fairgrounds in Grayslake, Illinois, the singer and his bandmates scrapped their performance because their laptops — which the musicians use to “run” their “show” — were lost.

Earlier on Saturday, the WIIL Rock Facebook page shared a video message from Radke announcing his band’s cancelation. In the one-minute clip, Ronnie said (as transcribed by BLABBERMOUTH.NET): “WIIL Rock, I regret to inform you that we have to cancel and we have no other option. I’m sorry. And I never make videos like this, but I feel like I owe it to you guys.

“So we show up to rehearsal. We only planned to rehearse one time. Because we just got off tour, we don’t need to rehearse that much. And we walk into rehearsals and our laptops are missing that we run all of our show on and stuff. And as a band in 2022, you need your laptops. It’s like driving a car without an engine. It’s really unfortunate. Supposedly they are lost. Blame it on our crew, I guess. I don’t know how that happened; that’s never happened before. [I’m] pretty upset about it. They are brand new laptops. And I’ll see you guys at Aftershock in Sacramento on October 2nd. I’m very sorry, guys.”

As of this writing, the video message has generated more than 1,400 comments on Facebook, with many of the commenters expressing their dismay over FALLING IN REVERSE‘s apparent inability to take the stage without their computers.

“Can’t you just play your instruments and sing”, one person wrote. Another person added: “Ha he said in 2022 bands need their laptops…what…ya I don’t think so! Should have lied and come up with a better excuse!” A third commenter chimed in: “I call crap…one of the main reasons I was gonna go. Less than 24hr notice for a headliner??!! How about at least a partial refund for tickets not scanned in”. Another person weighed in: “I’m not going to the festival but what pisses me off about them canceling is he’s blaming the crew. This excuse is bullshit. They just don’t want to play and instead of faking an illness like the rest of us do, he’s putting blame on the backs of people who work their asses of to make them look good. That’s what’s fucked up.”

One person who shared Ronnie‘s video message on Facebook wrote sarcastically: “Hey everyone! Public service announcement. If you were going to go see FALLING IN REVERSE in concert there’s been some absolutely horrible news…they don’t have their laptops!!! They have to cancel Such a bummer! I hope they get new laptops on stage soon so everyone can see them again! Please have some empathy for them.

“Can you imagine playing music in 2022 without a prerecorded laptop show? I know…Me neither. On the plus side, he DID say that they don’t need to practice much when they DO have a working laptop (that can play most of their show for them).

“Please support this band. They really outwork everyone else and mix that with true talent. Nothing can stop their success (except maybe WIFI issues). I hope they can get a new MacBook soon so they can exist again!”

SiriusXM radio personality Eddie Trunk, who has been a vocal critic of rock bands using pre-recorded tracks at their live shows, also offered his opinion, writing: “This is astonishing .. First I heard about this I thought it was a joke to wind me up. How much longer are fans, promoters , media, just going to accept the epidemic of live rock shows… not really being live? Paying your hard earned money to see a band play “live” that’s not truly live?! And there are countless bands in 2022 that hone their craft and play live! Tons! New and old !! Including the one that subbed for them in their slot, JACKYL . No laptop needed there! This is just unreal. But at least I give them credit for being honest. Wow. I am closer than ever to launching my own band. And I can’t sing or play a note .. simply amazing.”‘

Two years ago, HALESTORM frontwoman Lzzy Hale spoke to “Offstage With DWP” about her band’s insistence on performing completely live — without the aid of backing tracks. “We do it more selfishly, not necessarily as a statement,” she said. ‘But it has kind of become this interesting statement. We’re very proud of that. But also, just again selfishly, I don’t think I’d enjoy myself. I’ve guested with people — I’ve dueted with people and got up onstage where they have those things and I can hear it in my in-ear monitors — and some of it is, like, ‘Chorus in one, two, three, four…’ I’m, like, ‘Oh my gosh! This would drive me nuts.’ And also, I would rather have us sound imperfect than have somebody figure out that I’m miming, or a shaker goes awry — ‘Where’s the tambourine coming from?’

“I’m not a fan of when I find out my favorite bands do that,” she continued. “And, like I said, I’m not knocking anybody who does it — you do you. But for us, that’s just not our M.O. And there’s nothing more fun that going out on stage and knowing that you’re responsible for either we’re gonna be tight, we’re gonna be loose, something’s gonna go wrong, we’re gonna have to pull the train back onto the tracks, but that’s cause we’re listening to each other.

“And also, if we weren’t actually playing, we would just get worse as musicians,” she added. “We’ve been to shows where somebody’s computer went down — the tracks are no longer there — and then they don’t play anymore. And we’re, like, ‘Can’t you just plug the instruments in?’

Sorry be the bearer of bad news. This really sucks! The show will go on! thanks for supporting 95 WIIL ROCK and our 30th anniversary!

Hey everyone! Public service announcement. If you were going to go see Falling In Reverse in concert there’s been some…

This is astonishing .. First I heard about this I thought it was a joke to wind me up. How much longer are fans,…