Another musical era in Denver is coming to an end, but a new one is beginning where the last left off. South Broadway’s Gothic Theatre has been sold to the Anschutz Entertainment Group, also known as AEG Worldwide, for more than $2 million, but  AEG has been operating the venue for a decade.

The Gothic has been a landmark in Denver — or, more specifically, Englewood — for nearly a century. It was built as a movie theater sometime in the 1920s, and while no sources agree on an exact year, the era is clear from its remaining original design elements. The Gothic was an Art Deco beauty, the sleek styling and geometric adornments promising the lavish experience that film was back in the days before television, when even radio was still in its infancy.

The Gothic Theatre was a pioneer in the Denver area, too: It was the first cinema in the area to show the “talkies” — films matched with audio tracks so that audiences could hear the actors on screen and the music that accompanied a film didn’t have to be played live. As charming as that sounds to modern audiences — the Silent Film Festival at the Botanic Gardens each year is testament to the value of live music and film — it was a huge technological step forward, and in Denver, the Gothic had it first.

The theater was more than just a place to see movies back then; it was a big player in the building of the Denver culture and community. Just one example: In 1930, the Gothic hosted an Easter egg hunt at a park at Hampden and Broadway that’s now the Highway 285 interchange; it offered pony rides and Jack Davis’s popcorn wagon at well.  It was a center of community for Englewood, and during the Depression era, community was often necessary for survival. The pre-renovation facade of the Gothic, 1940.

In the 1940s, the Gothic’s exterior was renovated to keep up with the times and draw in modern audiences, competing with the many movie houses that had popped up in Denver over the decades. But luckily, the interior was largely left alone, waiting to be rediscovered by later generations further removed from their origins and therefore more enamored with their preservation.

But those scattered rock shows were notable. Among the acts the venue helped launch was none other than Nirvana, which appeared there with Dinosaur Jr. and the Jesus Lizard. Kurt Cobain had just written “Smells Like Teen Spirit” two weeks earlier.

During that scattershot but important time in the Gothic’s life span, it was unrenovated, dirty and dark — perfect for the alternative-music scene that was just coming to life. Bands including the Red Hot Chili Peppers, the Beastie Boys, Alice in Chains, Soundgarden, Skinny Puppy, Sonic Youth and more would play there, too, before Denver had other options such as the Bluebird, Ogden or Fillmore. 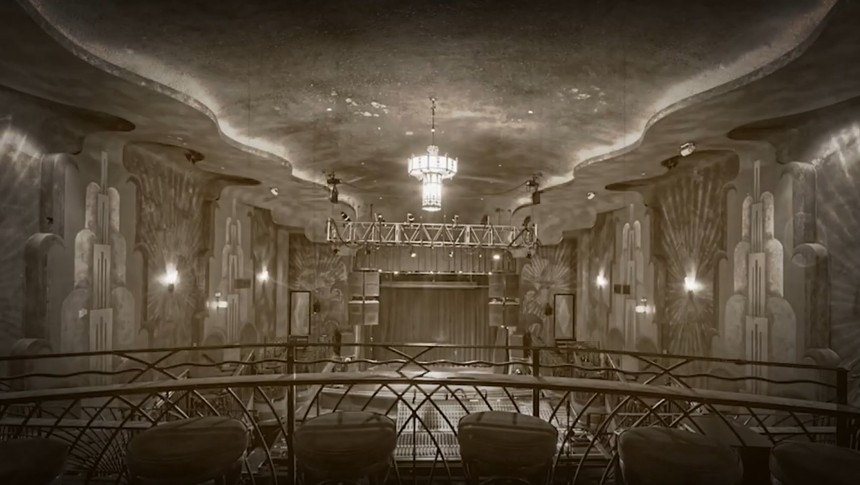 In 1997, two Denver businessmen bought the porn-clad Gothic shell, planning to turn it into quite the opposite: a family-oriented space for Christian charity events they called “Acts on Broadway,” with the “Acts” in the title referring to the biblical book. Those plans failed to materialize, which opened the door for Steve Schalk and his partner, Todd Kinion, to buy the venue for $175,000 in 1998. They completed the renovations and turned it into a notable Denver music venue, and community was brought back to South Broadway. “I know we’re doing a good thing,” Schalk told the Denver Post back in 1999, just before the venue was set to reopen with a performance by Leftover Salmon. And here’s a throwback: Tickets to that show were $15.

What will the new AEG era bring to Denver’s music scene? Some might worry that the venue may now take on a more corporate perspective, but AEG has already been booking the place for a decade. And for a venue like the Gothic, and for its many fans and patrons over the years, the show is the thing. Play on, Gothic, for another 100.

What’s your favorite memory of the Gothic Theatre?