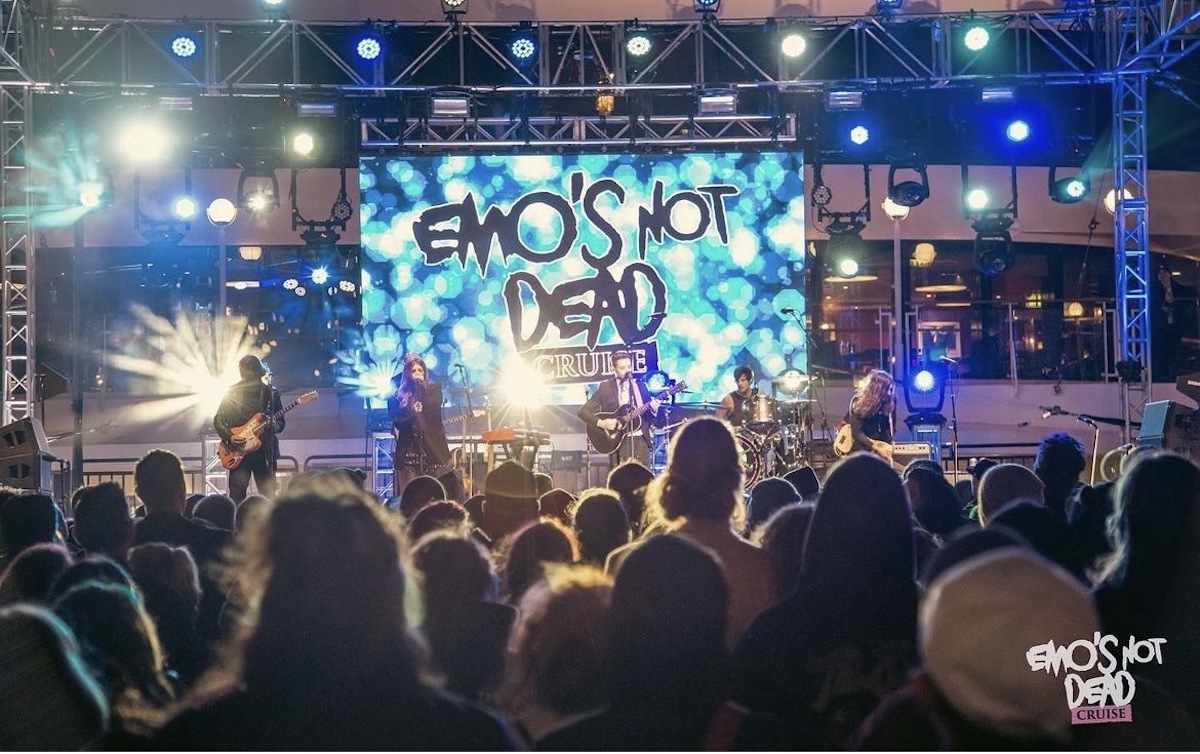 With the onslaught of reunion tours and themed festivals that have popped up since the pandemic has simmered down (but let’s be honest, has it?), it only seemed right to throw in a scene fest amongst the jam bandy, stadium rock gatherings we’ve been seeing. There was When We Were Young, its own little toe dip into devotion of an era when Hot Topic was still kind of cool, but why see burned CD classics on land? How 2019 of us. Thankfully, scene king Matt Cutshall took his “emo’s not dead” bit to the shallow seas (we sail) with a freaking cruise… and it was awesome.

The inaugural Emo’s Not Dead Cruise was a bit of curveball. Emos and water? Here’s where you’d insert a joke about turning the ocean black with our tears. Yet, something about it just… worked. From acoustic sets to bands playing seminal albums in full to a casino and other randomness, Cutshall didn’t come to play. The rest of us did, though, and we stepped into a MySpace wonderland ready to relive arguably the best era of our lives. There’s something about the collective excitement of a shared experience. You can feel everyone else’s energy and, the more people there are, the more amplified that zeal becomes. In essence, that’s what walking onto the Norwegian Jewel felt like — the wind and misty skies literally not raining on anyone’s (black) parade.

But this is only a fraction of what happened during the week. Getting around a regular festival is hard enough, and can be even more challenging in the middle of the ocean. Still, the ship became home, and for those four days, we treated it as such.

Tuesday, November 8th: Emery, Hawthorne Heights, and the welcome party of a lifetime

Night one was a bit of a doozy amongst the cruisers. The lay of the ship took some getting used to thanks to its many floors, twists and turns, but what clearly wasn’t difficult to find at all were the bars and the welcome party. The Bliss Lounge, a walkthrough bar connecting the middle floor of the ship, was taken over by a DJ set of millennial classics like Lit’s “My Own Worst Enemy” and the famously emo message behind Papa Roach’s “Last Resort.” The ship hadn’t even left the Los Angeles port yet, but the booze was flowing and the kiddies were screaming.

Especially at Emery’s set at Magnum’s downstairs stage. Think of it as the basement house show venue of a boat, and the entire place was packed with people aggressively looking to express their need for a good mosh. As Emery plowed through some of their familiars, elder emos plowed through the packed pit. It was glorious to watch, like one of those ant death spirals. Though it seemed like too small a venue for a band that goes that hard right of the gate, Emery mentioned they intentionally picked it as a way to get back to their early show roots. That energy wafted throughout the air, as it did at New Found Glory’s first set. Frontman Jordan Pundik ran out in full ship captain attire ready to go with “Understatement.” A new addition onstage was William Ryan Key from Yellowcard, subbing in for Chad Gilbert, out due to health reasons.

In a somewhat similar way, the acoustic sets Hawthorne Heights and Silverstein played in the Spinnaker Lounge were teeming with emotive faces and broken hearts. Milder on the artists’ side yet just as if not more impassioned on the audience’s, the Spinnaker stage was met with feverish shouts and honestly. That was to be expected though, since devotion and desire were brewed in cauldrons of Manic Panic hair dye. When Hawthorne was up, they invited a couple from Norway onstage to get engaged. It was like a Tumblr romance come to life.

In Silverstein’s case, it was singer Shane Told performing solo on this night. There was a different type of intimacy to his performance — just him and his guitar allowed for more chatter and interaction with fans staring up at him in adoration. It also made for a nice distraction for people who were waiting patiently to see Dashboard Confessional. They were supposed to play on the pool deck but wind and cold air caused a major delay. Chris Carraba and co. were moved to the late night slot at the Stardust Theater, but that didn’t stop anyone from being awake enough to cry over “Vindicated,” “Hands Down” and of course, “Screaming Infidelities.” It was a good way to ease into the next few days — gentle, but pleasantly jarring to the senses.

Highlights: JT from Hawthorne Heights very hilariously and accurately saying “This is 401k emo. It isn’t cheap to do this,” when expressing gratitude for everyone who was able to be on the cruise.